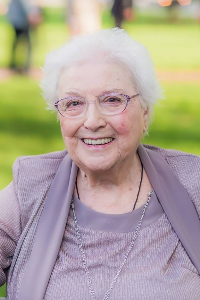 Mavis (Perkins) Grocott, 93, beloved wife of the late Francis G. Grocott, died Tuesday, October 8, 2019 at Seasons Hospice in Milton, MA. Born in London, England, she was the daughter of the late Harry and Georgina (Stock) Perkins from Enfield, England, and sister to the late Charlie, Derrick, Harry, Olive, Peg, and Doll.

Mavis and Francis moved to Canada in 1949 where she worked as an accountant for Pratt & Whitney. They then moved to the United States in 1959, settling in Wenham where she was a bank teller at Beverly National Bank, and worked until she took on the loving “Nana” role when her first grandchild was born.

Mavis enjoyed traveling (especially vacationing to Newfound Lake), was the “Cribbage Queen”, and was a great seamstress. She especially enjoyed spending time with her beloved family and friends.

Mavis and Francis shared 69 wonderful years of marriage. She is survived by her daughter, Julie Sheflin and her husband, Francis of Weymouth, three grandchildren, Matthew Francis Sheflin, Andrew Perkins Sheflin and his wife Julie, and Jennifer Hart Sheflin all of Weymouth. She also leaves behind many friends, especially the Robichau’s, who are friends that became family.

Relatives and friends are respectfully invited to the memorial service in honor of Mavis on Monday, October 14, 2019 at 10am in the Old South Union Church (25 Columbian Street, South Weymouth, MA 02190). Burial will be at a later date in Wenham Cemetery located in Wenham, MA. Contributions may be made in her memory to The Arthritis Foundation (29 Crafts Street, Suite 100 Newton, MA 02458.