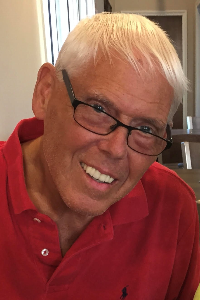 Vincent Mulcahey (“Vinski” to his grandchildren), grew up in Watertown, MA, the second of four children by Mary Mulcahey and John “Bud” Mulcahey. Vin was Jack’s Irish twin, at only 11 months his junior. Next came Christine (“Chrissy”), then Dave.

Vin spent the summers with his family at the beach at Brant Rock and developed a lifelong love affair with the ocean. He loved to tell stories of skin diving for lobsters at Gurnet Point and catching prize stripers from whatever boat he could find. He had a spotty boating history, never failing to find rough seas in the Cape Cod Canal with Chrissy and her husband Dom, riding a beat through high seas from Cos Cob in Jack’s boat, finding a squall in a sunfish sailboat off Falmouth at the Red Jacket Resort, or watching from Mary’s deck in Manomet as Davey capsized a catamaran. He always maintained his calm sense of humor through the worst times.

Vin was a standout football lineman at Watertown High School, and earned full scholarships to Brandeis University in Waltham and University of Bridgeport in Connecticut. When the Brandeis football program was cancelled, Vin went down to Bridgeport to play and study.

When the New York Giants (the only game in town at the time) failed to draft him after his freshman year, Vin returned to Watertown and turned his attention to blind dating and business classes at Boston College. There, Vin found his true calling on a blind date with Saralee Goldston from Newton, then a student at Boston University.

Within a few years, Vin and Saralee were married. Not long after that came Gary, the first of their three children. Next was Craig and finally Stacey, the princess of the family and apple of Vinnie’s eye.

From Happy Face Toy store to Corey Bulk Vending, Vinnie’s fun and silly personality was fulfilled as he provided treats and sweets to children. All of Vinnie’s kids battled over who would join him to work on Saturdays and weekend vending trips from Poughkeepsie to New Jersey to Maine and many parts in between. It was often said that Vin never measured trips in days, but instead by the number of meals. Even a one day trip was never a three-mealer, as snacks were a necessity. Vin was able to employ his son Gary, brother Dave and Chrissy’s husband Dom. No matter where he went, he always came back with something special for Stacey.

A doting father, husband and grandfather, he was the perfect champion for his princess Stacey. He watched his sons and grandsons Oscar and Eli continue the family football tradition and never missed a chance to frolic and giggle with his granddaughter Stella at the pool or in the yard.

After Saralee and Vinnie became empty nesters, they traveled the world, including China, Spain, Ireland and Italy. But they were just as happy to spend a weekend strolling through Boston’s Back Bay and waterfront.

Throughout the years, Vinnie became a ringleader and emcee for annual family celebrations of St. Patrick’s Day, Christmas, and summer pool parties. Even when his illness began to overwhelm him, he maintained his good humor, fresh attitude and devotion to his family.

Vinnie will be missed in body, but his spirit lives strong in the hearts of everyone who knew and loved him. He was beloved husband to Saralee (Goldston) Mulcahey. Devoted father to Gary Mulcahey, Craig Mulcahey and his wife Stacy, and Stacey Nugent and her husband Sean. Dear brother to Christine Aquilano and her husband Dominic, David Mulcahey and his wife Kathy, and the late John Mulcahey. Loving grandfather to Oscar and Eli Mulcahey and Stella Nugent. Cherished uncle to Heather Mulcahey, Erin Agnello, John Aquilano, Lauren DeTore, and Kaitlin and Chris Mulcahey.
His funeral mass will be celebrated on Thursday, October 10 in St. Joseph Church, Medway at 10:00a.m.
Internment will Sharon Memorial Park.
Visitation will be on Thursday from 8:30 – 9:45 in the Ginley Crowley Funeral Home (www.ginleyfuneralhomes.com) 3 Barber Street, Medway.
Following interment, , the family will be at his residence until 8 p.m. on Thursday and from 2-4 pm and 7 -9 pm of Friday.
In lieu of flowers donations may be made in his memory to VNA Care Hospice 100 Trade Center G500, Woburn, MA 01801.