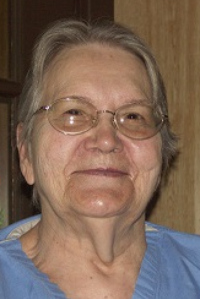 Jean R. Sprague (Reichert), age 87 of Westwood passed away October 7th after a lengthy illness.
Jean was born in Roslindale, Massachusetts, and moved to the Islington Section of Westwood in July 1955. She died in the house in which she raised 4 children.
While her children where young, Jean worked in several cafeterias in Westwood. Later Jean worked for many years at Mother’s Morning Out, a day care in Westwood, before becoming nanny to several families and many children, all of whom she loved.
Jean taught herself how to crochet in the 1960’s and quickly became known for her afghans, hats, mittens, sweaters, dresses, and other items she gave as gifts. She also loved to read, do crossword puzzles, bake, and garden, and with her husband was a lifelong fan of country music. Jean especially enjoyed making crafts, cooking, and just visiting with her great granddaughters Anna and Natalie.
Jean was an avid traveler in the U.S. and Canada and also traveled to London with her daughter in 2001, and Australia and New Zealand with her daughter and sister Betty in 2004.
Jean was a member of the Church of Jesus Christ of Latter-day Saints.
Beloved wife of the late Donald E. Mother of Donna Gurski of Westwood, Matthew Sprague of Randolph, Wade Sprague of NH, and the late Harry Sprague. Sister of the late Raymond and Frederick Wheeler, Dorothy Lebrun, Elizabeth “Betty” Brooke, and Carl Reichert.
Grandmother of Tom Gurski, Jr., Elizabeth Patterson, Jackie Hayes, Leah Neergaard, Denise Colcord, Pamela Mott, Jacob Sprague, and Melissa Sprague. Loving great grandmother of Anna and Natalie, Conrad and Jacoby, Axel, Freya, and Michael, Emily, Patrick, and Tyler.
She was the loving aunt to Jane Apidianakis, Larry Brooke, and Michael Brook. She also leaves behind many friends.
Visiting hours at the Dockray & Thomas Funeral Home 455 Washington St. Canton Wednesday 4-7 pm. Funeral service at the Funeral Home Thursday morning at 11. Burial private. Donations may be made in her memory to St. Jude Children’s Hospital 262 Danny Thomas Pl Memphis, TN 38105.