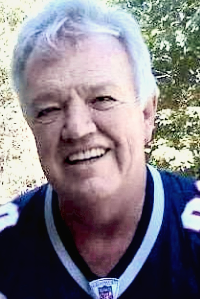 BUXTON- Robert "Bob" Michael Kennedy, age 69, of Buxton, Maine passed away on October 4, 2019 in Portland after a courageous battle with cancer.

He was born on December 19, 1949, the son of a Boston firefighter and a homemaker in Quincy, Massachusetts. He was the second born in a family that would grow to nine children, and was a standout in football from a young age. After high school he continued to play football competitively, attended the Woodstock Music Festival in 1969, and served his country in the Vietnam War for the United States Army.

After Vietnam, Bob moved to Wolfeboro, New Hampshire and started work at the Allen A, a classic New England family resort on Lake Wentworth. It was there that he met Marcia Bernard, the love of his life. She was a college girl from Northern Maine, working at the resort for the summer. He was a charismatic guy from Massachusetts who rode motorcycles and had long hair and a guitar on his knee!

They were married on April 19, 1975, in Wolfeboro, and lived and worked at the Allen A for eleven more years, raising three sons in a cozy little home a short walk from the beach.

He studied at St. Francis College in Biddeford, Maine between summer seasons, living with Marcia at Fortune's Rocks and graduating with a double major in English and Political Science before the boys were born. Fortune's Rocks was a place that remained special to him for the rest of his life.

Bob accepted a job as manager of the Racket and Fitness Center in Portland in 1986, and moved with his family to Buxton, Maine that fall. He quickly became an active member in his community. He coached tee-ball, baseball and football to countless Buxton kids over many years, and was a long-time member of the M.S.A.D. 6 School Board. He and Marcia volunteered regularly as members of St. Anne's Church in Gorham, where Bob's familiar, warm voice delivered readings as a lector at Church services for more than ten years.

He had a long career in facilities management, working at UNICCO Service Company and DTZ and retiring as an Operations Manager for UG-2 in December of 2018. Bob remained an active and gifted athlete throughout his life, playing on tennis teams that won consecutive national tournaments and embracing a passion for golf. He loved to read and write, take walks and snorkel on vacation with Marcia, and watch the Patriots and Bruins games with his sons. But maybe more than anything, Bob loved to spend time with his grandchildren.

He is predeceased by his parents, Joseph and Elizabeth (McMillen) Kennedy and a brother, Patrick. He is survived and remembered with love by his wife, Marcia (Bernard) Kennedy; his son Adam Kennedy and wife, Marci; his son Travis Kennedy and wife, Liv; his son, Casey Kennedy; his five adoring grandchildren - Olivia, Boden, Ella, August and Cole; brothers John, Peter, David, Stephen, Timothy and Michael; his sister, Catherine-Mary Ellis; and countless nieces, nephews, friends, neighbors and loved ones.

In lieu of flowers, memorial contributions can be made to "Free ME from Lung Cancer," 176 Leavitt Road, Augusta, ME 04330.