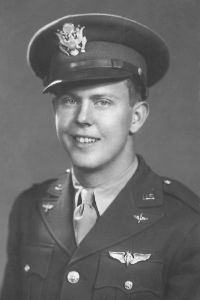 Killed in action, August 1 1943 in Ploesti, Romania while a member of the USAAF 9th Air Force, 98th Bomb Group. Joe was a bombardier on the B-24, “Old Baldy”. He had completed his twenty-five missions when he and his crewmates were lost in “Operation Tidal Wave”, a high casualty, low level bombing raid designed to destroy Hitler’s oil refineries at Ploesti.

For seventy-six years Joe’s identity was known only to God. But through the relentless efforts of the Defense POW/MIA Accounting Agency, and the scientific wonder of DNA, he has been identified and has returned to his family, and will be, finally, laid to rest beside his mother. For his heroism and valor during WWII, Joe was posthumously awarded the Purple Heart, the Distinguished Flying Cross with one oak leaf cluster and the Air Medal with four oak leaf clusters.

Joe was born and raised in Needham, MA. He was, by his sister Katherine’s telling, a kind and easy-going soul. His mother, Irish-born, was Mary Agnes (Murphy) Finneran, and his father was Patrick Joseph Finneran. He had one sister, Katherine Glennon, and four brothers, Lawrence, Thomas, Patrick and John. For years, he was associated with the Needham Golf Course, first as a caddy, later as assistant pro. The family moved to Boston where Joe graduated from Jamaica Plain High School, class of 1939, a standout athlete.

Joe enlisted in the USAAF eleven days after Pearl Harbor. He was stationed in Benghazi, Libya, and was one of the very first Catholic bombardiers to participate in the bombing of Rome. He was only twenty-two when he was killed in service to his country.

Joe is survived by his nephews William Glennon of Quincy, MA and Robert Finneran of Walpole, MA, and his nieces Mimi Finneran and Sheila Creighton of Vero Beach, FL, Gail Finneran of Jacksonville, FL and Mary Anne Baker of Attleboro, MA.

The public is most cordially invited to participate in any part of this tribute to our uncle, 1st Lieut. Joseph E. Finneran, a true American hero.