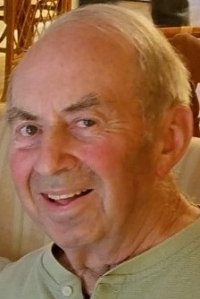 Charlton/Auburn
Roy Alden Ferguson, 84, passed away September 28, 2019 after a long illness.
He was born in Worcester, November 7, 1934, son of the late Charles and Olive (Stahl) Ferguson and grew up in Charlton where he graduated from Charlton High School in 1953 and was voted Best Dressed in his class.
Roy worked as a tool/cutter grinder for Morgan Construction and a shipper-receiver for CPC Engineering and also served for 8 years in the U.S. Navy Reserves.
He is survived by his wife of 64 years, Marjorie (Robbins) Ferguson and was the loving father to his sons, Kevin and Mark Ferguson. He also leaves his grandchildren; Wayne and Shawn Ferguson, Michelle Davis and her husband Ben, Laura Anderson and her husband Keith, and 10 great grandchildren, and his sister, Nancy Johnson. Roy was predeceased by brothers; Russell, Ralph and Warren.
Roy had many hobbies doing wood working making signs, furniture, clocks and Authentic looking toys and trucks. He also enjoyed landscaping, photography and music, traveling and seeing many places in the U.S.
Calling Hours will be Wednesday, October 2, 2019 from 5-7 PM at the ROBERT J. MILLER-CHARLTON FUNERAL HOME, 175 Old Worcester Rd., the Funeral will be Thursday, October 3, 2019 at 11 AM in the Funeral Home, followed by burial in Northside Cemetery in Charlton.
To leave a message of condolence, please visit:RJMillerfunerals.net