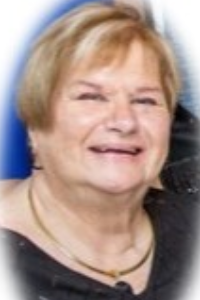 MacMULLEN, Ann Marie (Jagello) of Winthrop passed peacefully on Sunday, September 29, 2019 after a long illness at the age of 77.

Ann was born in Boston on October 4, 1941 to the late James P. and Mary C. (Holerick) Jagiello. She graduated from Monsignor Ryan Memorial High School in 1959. On September 30, 1961 she married, and after some time moved to Winthrop where she happily lived for many years. Ann actually loved to be out in the work field having been employed by Koplow Trimming, Eastern Airlines and then retiring from Continental Airlines in 2012. Travel, especially to Aruba, was one of Ann’s joys. Getting together and keeping in touch with her friends and family also kept her busy.

Ann was the devoted wife of the late Robert B. MacMullen, loving mother of Carolann Vasconcelos and her husband Ved of Milton, Paul MacMullen and his wife Barbara of Winthrop, Diane MacMullen-Knanfi and her husband Mo of Winthrop, and Scot MacMullen and Audrey Inkiarto of Winthrop. She was the beloved Nana of Jennifer, Amanda, Nicholas, Lauren, Christopher, William and Marissa, dear sister of the late Sr. Marion Jagiello, Jeanne Varney and Dorothy Jagello. Ann is survived by her brother-in- law Tom Varney, sister-in-law Karen McMullen, brother-in-law David McMullen, brother-in-law Kenneth McMullen and his wife Patti and many nieces and nephews.

Her funeral will be from the Maurice W. Kirby Funeral Home, 210 Winthrop St., Winthrop, on Friday, October 4, at 9AM followed be a Funeral Mass in St. John the Evangelist Church-Winthrop at 10AM. Relatives and friends are invited. Interment will be in Winthrop Cemetery (Belle Isle Section). Visiting hours will be held in the funeral home on Thursday, from 4-8PM. In lieu of flowers, donations in Ann’s memory can be made to the Chelsea Jewish VNA @ www.chelseajewish.org. For guestbook, please visit our website at www.mauricekirbyfh.com