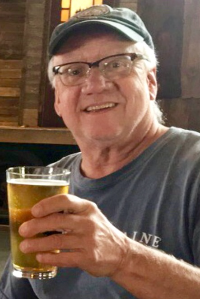 Charlton
Robert E. ‘Rob’ Scully, 61, passed away unexpectedly on Thursday, September 26, 2019 while spending time at his beloved camp near Bethel, Maine.
Rob was born in Holyoke on February 11, 1958, son of the late George B. and Cecile (Pin) Scully, Sr.
He grew up always loving the outdoors and often talked fondly of hiking trips during his early years.
Rob graduated from the College of the Holy Cross in Worcester, then received an MSW from UCONN. He worked passionately as a social worker for many years in the Worcester area.
Rob leaves behind his wife of 33 years, Beth of Charlton; his two children, Laura of Worcester and Cameron of Charlton; his two sisters, Paula and Liz of Portland, Oregon; his dear nieces and nephews; and his dog and sidekick ‘Scotty’.
Beside his parents, he was predeceased by a brother, George B. Scully, Jr. and his uncle, Dr. Robert E. Scully.
Rob retired seven years ago and enjoyed these years with family and friends. He was most proud of his kids, Cam and Laura, and was in touch with them both every day. His family has many memories of trips to Squam Lake, the White Mountains, and Maine, going camping, and hearing Rob’s hunting tales. Rob was famous for his fresh-roasted coffee and homemade pizza, and he was often sought after for household projects. He could be found walking around Wells State Park or Old Sturbridge Village during nice weather, and he loved to keep up on current events.
Rob was patient, kind, and honest; he loved to laugh and joke while enjoying good food and beer; and was always someone who could strike up a great conversation. He will be most remembered for his integrity and devotion to his wife and his kids.
Friends and family are invited to attend a visitation period on Friday, October 4, 2019 from 5-6 pm at the ROBERT J. MILLER-CHARLTON FUNERAL HOME, 175 Old Worcester Rd., followed by a Memorial Service at 6 pm in the funeral home.
In lieu of flowers, donations may be made to: the Squam Lakes Association in Holderness, New Hampshire.
To send a message of condolence, please visit: RJMillerfunerals.net