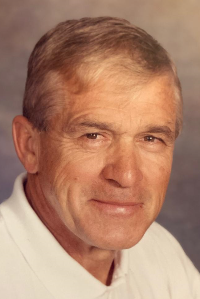 SCARBOROUGH – Joseph “Joey” “Coach” “Big Joe” Bouchard, age 84, passed away
on September 27, 2019. Joey was born in Portland, Maine on April 5, 1935.
Joey spent his childhood in Madawaska, Maine, was fluent in French and knew at an
early age he was destined to be a leader. After briefly considering the priesthood, Joey
decided his love of sports and desire to lead was better suited for pursuing a degree in
higher education with a focus on health and athletics. He graduated from Assumption
Prep in Worcester, MA, and continued on to earn a Bachelor of Science degree from
Assumption College. Joey earned advanced degrees from Springfield College and
Boston University.
Joey began his long and successful coaching career at Nasson College. The respect and
reputation he earned as a college coach along with his fluency in French led him to be
chosen by the U.S. State Department to help develop and coach basketball players in
West Africa. Joey spent the next ten summers working in West Africa as a basketball
coach, consultant and African diplomat. In 1983, he proudly served as coach and scout at
the National Sports Olympic Festival in Colorado Springs.
Joey is best known for his work at the University of Southern Maine (USM) where he
taught and served as basketball coach for 20 years and was a Huskie Hall of Fame
member. For Joey, it was never about the wins, it was his dedication to his students and
his selfless commitment and ability to transform their lives— ensuring their academic,
professional and personal success.
After retiring from coaching in 1987, Joey oversaw the Outward Bound Program at
USM. Joey maintained a close relationship with his students throughout his life and
enjoyed spending time with them and reminiscing. During retirement, Joey wintered in
Florida with his wife and best friend Barbara playing golf. He was an avid dancer and
enjoyed music.
Joey is survived by his extraordinary wife Barbara with whom he celebrated their 61st
wedding anniversary earlier this September, his children Pamela Bouchard and her
husband Andrew Icarangal and daughter Sarah of Las Vegas, Nevada, and Peter
Bouchard and his wife Maureen and grandchildren Michelle, Joe, and Nicole.
A funeral mass will be held at St. Maximilian Kolbe Church, 150 Black Point Road, in
Scarborough on Wednesday October 2, 2019 at 10:00 a.m.
Online condolence messages can be submitted at the Chad E, Poitras Cremation and Funeral Service website, www.mainefuneral.com
In lieu of flowers, memorial contributions may be made to the American Diabetes
Association, PO BOX 15829, Arlington, VA 22215 or USM Athletics, Attn: Al Bean, Campus Ave., Gorham, ME 04038