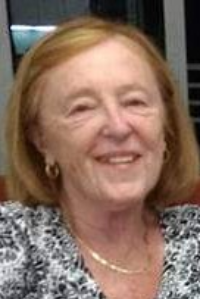 Claire was born in Biddeford on Aug. 15, 1936, the daughter of the late Alphonse and Fabiola Beaudoin. She was brought up in the Roman Catholic tradition, attending both French and English speaking Mass at St. Mary’s and St. Joseph’s churches in Biddeford. Claire became a Daughter of St. Anne as a child, and as such was humbled with the honor of being married behind the communion rail later in life. She attended public schools in Biddeford, and graduated from the University of Maine – Portland/Gorham, with a degree in elementary education.

She married Benjamin Grant at St Joseph’s Roman Catholic church in the Spring of 1958, and was blessed with three children; Rick, Lisa and Laurie. Benjamin passed in 1983.

Her life was blessed to have a second truly devoted husband and love story. In 1987, Claire married Paul A. Grant, a wonderful man who was a loving husband, partner and father to her children for the rest of her life. Claire’s devotion and love for God and her family were obvious to all who knew her; often declaring the greatest joy in her life was spending time with family. She loved and adored her grandchildren; Julie Grant, Ben Grant, Trena Soucy, Leeann Gadway, Chris D. Gadway, Shane Flaherty, Meridith Vachon and Jason Grant.

Claire was thrilled to welcome great-grandchildren and rejoiced with the birth of each new member of the family circle. She cherished them all and loved being with them, proudly telling all her friends and posting photos on Facebook along with stories of their time spent together. A great blessing in Claire’s life were the precious moments spent with Kaili Moody, Nevaeh Hagerman, Cameron O’Donnell, Richard Grant, and Aaron Soucy.

During her time working outside the home, Claire embarked on what would become a long and distinguished career; teaching Second Grade in Saco Schools for 20 years, 1972-1991. She is remembered as a kind and patient woman, rarely frazzled by life’s trying events and never harsh with others in words or temperament. Her life was an example of peace, love and devotion.

Claire's greatest joy in life was being a wife, mother and grandmother. She treasured her time with her family above all else, but also delighted in sharing experiences and adventures with friends and family. She enjoyed travelling, cooking & baking, and playing golf. At her winter residence in Davenport, FL, she delighted in friendships with people who brightened her life. A skilled Petanque player, and game enthusiast, Claire was a desired partner at social gatherings. She was an avid Patriots and Red Sox fan. Claire enjoyed planning High School Reunions for many years, and was Co-President of the Mainly Mainers Newmar Kountry Klub.

She is predeceased by her first husband- Benjamin Grant; and a son- Richard M. Grant. Claire is survived by her husband Paul A. Grant; children- Lisa M. Wilkinson and her partner Rick Farnum of Saco and Laurie A. Grant and her husband Gil Doughty of Portland; stepchildren- Paul Grant Jr. and his partner Susan Stilphen and Chris Grant. She is also survived by lovingly supportive grandchildren Julie Grant, Benjamin Grant, Leeann Gadway, Chris Gadway, Shane Flaherty, Trena Soucy and step grandchildren Meridith Vachon and Jason Grant; and several great grandchildren.

Online condolence messages can be submitted at the Chad E. Poitras Cremation and Funeral Service website, www.mainefuneral.com
In lieu of flowers, memorial contributions can be made to the Maine Parkinson Society, 146 Parkway South, Ste. 210, Brewer, Maine 04412