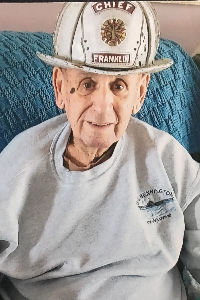 Ret. Franklin Fire Chief, Francis J. Molloy, Jr. 88, of Franklin, died peacefully, with family at his side, Wednesday September 25, 2019 at All American Assisted Living in Wrentham, following a long illness. He was the beloved husband of Denise A. (Arsenault) Socorro-Molloy, with whom he shared 14 years of marriage and the late Louise A. (Giancola) Molloy, who died in 2001.

Born June 30, 1931, in Milford a son of the late Francis J. Molloy, Sr. and Winifred V. (Driscoll) Molloy, he was a lifelong Franklin resident.

He was raised and educated in Franklin and was a graduate of Franklin High School Class of 1949.

A proud American, he joined the United States Navy in 1951, he was stationed aboard the USS Bennington, where he attained the rank of SKSN. He was awarded the National Defense Service Medal, the Good Conduct Medal, and the Navy Occupation Service Medal with Europe Clasp. Francis also received a Navy Commendation for heroic actions aboard the USS Bennington, on May 26, 1954 a series of explosions and fires trapped numerous sailors on the ship and he took immediate action to help. He was honorably discharged in December 1954.

Upon returning home to Franklin, former Chief Connor Pond appointed him a firefighter on January 1, 1955 and worked his way to make Chief in 1983. After a long career he retired in 1993.

“Chief” was a former longtime resident of Port St. Lucie, Florida, where he played many rounds of golf.

In addition to his wife, he is survived by a daughter, Theresa A. Molloy of Plymouth, a sister Ann Gosselin of Franklin, 7 grandchildren & 7 great grandchildren.

He was the father of the late Maureen A. Whitestone and Mary F. Molloy.

Relatives and friends are invited to attend his funeral Monday Sept. 30th, at 9AM from the Charles F. Oteri and Son Franklin Funeral Home 33 Cottage St. followed by a funeral Mass in St. Mary's Church, 1 Church Square Franklin at 10AM.

Interment with military honors will follow at St. Mary's Cemetery.

Calling hours are Sunday from 1-5PM.