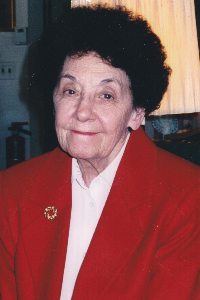 Frances Lucille (Boren) Ashby, 101, passed away peacefully and quietly at home on the morning of her birthday, Monday, September 23, 2019, following a brief illness.
Lucille was born in Owensville, Indiana, to Doyle and Esther Boren on September 23, 1918. The Boren family moved to Anderson in the late 1920's, where her father took a management position with The Pierce Governor Company. Lucille graduated from Anderson High School in 1936. Following graduation, she was an hourly employee at Delco Remy, where she was to meet her future husband, Virgil Ashby and they were married shortly before he enlisted in the armed forces following the attack on Pearl Harbor. During the war, she joined her father, and later her brother, Leland, in working at the Pierce Governor Company where she was the Production Scheduler for the entire factory, until the birth of her first son. For the next sixteen years, she was a devoted mother to her two boys, David and Dennis, but then returned to work as a teacher at the Marsha Spall Nursery School in Anderson, where she was employed until she was in her early eighties. She shared with her sons that she was most proud of her ability to work with and relate to the youngest students. After her retirement, she and three life-long friends travelled extensively throughout the United States and succeeded in visiting all 48 continental states by the time the group members had reached their early 90's.
A member of the New Horizon United Methodist Church in Anderson, she has been a continuous member of this church and one of its predecessor churches, the Otterbein United Methodist Church located at 9th and Madison since the late 1920's at which time it was known as the First Evangelical United Brethren Church which was pastored by her uncle, the Reverend Henry Schlarb. Church life was a priority for Lucille and Virgil and her two sons recall that, while growing up, if the church doors were open for any type of service or activity the Ashby family was always there.
She is survived by her two sons, David Ashby, Anderson and Dennis Ashby, Glen Ellyn, Illinois and was preceded in death by her husband, Virgil Lawrence Ashby, who passed away in 1978 and her brother, Leland Emerson Boren, Upland, Indiana, who passed away in 2018.
Visitation and Celebration of Life service will be held at Rozelle-Johnson Funeral Service on Saturday, September 28, 2019, with the Reverend Beth Henricks officiating. Reverend Henricks, a cousin of Mrs. Ashby, is an associate pastor of Indianapolis First Friends Church. Special music will be provided by vocalist Melinda Crouch. There will be a two hour period of visitation starting at 10:00 A.M. with the funeral service to begin at 12:00 noon. Burial will be in Anderson Memorial Park Cemetery.
Post online condolences at www.rozelle-johnson.com