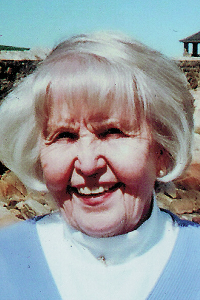 Mrs. Helen J. (Rusiecka) West, a longtime resident of Andover and beloved wife of the late Charles “Billy” West, passed away at the Prescott House Nursing Center in North Andover on Sunday morning, September 22, 2019, after a long illness. She was 94 years old.

Helen was born in Lawrence, Massachusetts, on December 26, 1924. She enjoyed dancing camping and being outdoors in the sun. A very social person, Helen enjoyed working for over 50 years in the nursing profession. She will be dearly missed.

Helen is survived by her loving sister; Sonia Satsuk, children; Joseph W. and his wife Marci G. Chamberlain of Salem, New Hampshire, Judith and her husband James Lynch of Naples, Florida and Kimberly West Heidt and her husband Robert S. Heidt of Amesbury, daughter-in-law; Susan Chamberlain of North Andover, nine grandchildren and several great-grandchildren. She was also the mother of the late Mickey and Kevin Chamberlain.

Her funeral service will be privately held. Arrangements have been entrusted to the Burke-Magliozzi Funeral Home of Andover. Donations in Helen's memory may be made to charity of your choice. For additional information, please visit, www.burkemagliozzi.com.