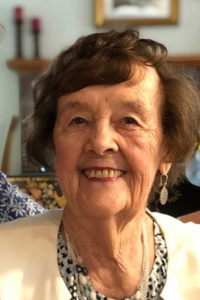 Barbara A. (Hayes) McGovern, 90, of Franklin died Sunday, September 22nd at her Franklin home, surrounded by her family. Mrs. McGovern was the wife for 43 years of the late John D. McGovern who died in 1998. Born in Boston on June 2, 1929, she was the daughter of the late Joseph and Florence (McGue) Hayes. She attended Lesley College, Boston State College and Regis College. She was a 56 year resident of Franklin. Every summer, she could be found at her home at Wellfleet enjoying its magnificent beaches, scenery and her family. Mrs. McGovern was an elementary school teacher, who also taught special education. She enjoyed singing with the Sweet Adelines and the Silvertones of the Franklin Senior Center.

She was the loving, devoted mother of four children, John M. McGovern of Duluth, Georgia, Susan Ricercato and her husband, James, of Westford, Thomas H. McGovern of Franklin, and Ellen Hester and her husband, Shawn, of Medway. She was the sister of the late Jean (Hayes) Meissner and Helen (Hayes) Nolan. She was the sister in law of Paul Nolan, the late William Meissner, and the late Robert McGovern. Mrs. McGovern is survived by her four beloved grandchildren, Philip Ricercato, Laura Ricercato, Julianne Hester, and Andrea Hester.

Her funeral will be held on Saturday, September 28th from the Charles F. Oteri & Son Funeral Home, 33 Cottage Street, Franklin at 9:00 am, followed by a funeral Mass at Saint Mary Church, One Church Square, Franklin at 10:00 am. Her burial will be at Fairview Cemetery, 45 Fairview Avenue, Hyde Park. Calling hours will be on Friday, September 27th from 4 - 7 pm.

In lieu of flowers, expressions of sympathy may be made in her memory to American Heart Association or St. Mary Church, Franklin.