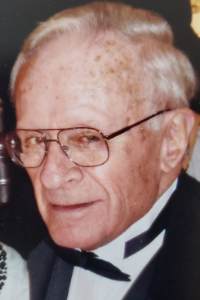 WORCESTER – Richard L. Gaudette, of Worcester died peacefully on September 17, 2019 at St. Vincent’s Hospital. Born and raised in Spencer, he was the son of the late Edward H. Gaudette and Evelyn A. (Duhamel) Gaudette. He is survived by his beloved wife of 58 years, Pauline (Berthiaume) Gaudette.

Richard graduated from David Prouty High School in 1948 and received Bachelors and Masters degrees from Assumption College and a Masters degree in education from Worcester State College. He worked in the Spencer/East Brookfield Regional School District for 45 years, retiring from David Prouty in 1997. In addition to teaching, he served as Prouty’s Athletic Director for 8 years and its Director of Guidance for 32 years. His legacy remains in the thousands of Prouty students he taught, counseled, and mentored across his career in education.

Throughout his long and distinguished life, Richard was wholly dedicated to the service of others – at home, work, church, and in various professional and civic organizations. For many years, he was active in the Worcester County Personnel and Guidance organization and the Massachusetts School Counselors Association. He was a Boy Scout troop leader and a member of the Spencer Finance Committee. As a member of Mary, Queen of the Rosary Parish in Spencer, he served as a religious education instructor, a member of the Parish Council and Finance Committee, and was a longtime lector at Mass.


He will be dearly missed and remembered by the five children he and Pauline so lovingly raised: Lisa Knox and partner Rob of Marlboro; Philip Gaudette and his wife Julie of Worcester; Michael Gaudette and his wife Shannan of Alpharetta, GA; Kevin Gaudette and his wife Kathy of Springfield, OH; Lauren Simkewicz and her husband Andrew of Westminster; and his fifteen grandchildren. His wisdom, selflessness, and example as a father, husband, and grandfather will live on in each of them.

Calling hours will be held on Sunday, September 22nd, from 4:00 to 7:00 pm in the J.HENRI MORIN & SON FUNERAL HOME, 23 Maple Terrace, Spencer MA. A Mass of Christian Burial will be celebrated at 10 am on Monday, September 23rd, at Christ the King Church, 1052 Pleasant Street, Worcester. Burial will follow in Worcester County Memorial Park, Paxton. Relatives and friends are asked to go directly to the church for the Mass. In lieu of flowers, donations may be made in Richard’s honor to the Richard L. Gaudette Memorial Scholarship Fund c/o D.P.H.S, Permanent Scholarship Fund, P.O. Box 172, Spencer, MA 01562.