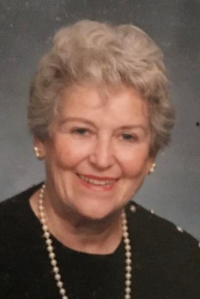 
Adrienne Gage Welling, 90, died peacefully at her home in Scarborough, Maine on September 16th, 2019. Adrienne was born in Trenton, New Jersey, the third of four children of Bruce Leo Gage and Adrienne Rooney Gage, and lived all of her life in New Jersey, Maine, and Florida. She was predeceased by her husband, Dr. Seth Fisher Welling.

Most important to Adrienne was her love of family. Adrienne leaves behind her two daughters, Nancy Gage Welling of Scarborough, Maine, and Sally Welling Lafferty, and her husband Mark R. Lafferty of Lafayette, California. She was predeceased by three children: Carol Beth Welling, Mary Welling Hunnewell, and Seth Fisher Welling, Jr. In addition to her two daughters, she is survived by her son-in-law Hollis Hunnewell of Cohasset, Massachusetts, and daughter-in-law Christine Fiestas, her husband Juan and their children, Manuel and Ines Fiestas of Corpus Christi. She is also survived by her grandchildren: William H. Lafferty; Benjamin Sanderson, and his wife Alison; Hollis, Fisher, and Charlotte, Hunnewell; and Nash Welling and his wife, Kaitlin. She leaves behind two great grandchildren, Hannah and Sophia Sanderson.

Adrienne and Seth were true sailors and together they enjoyed many years of exploring the Maine coast aboard Sea Swept and then on their second boat, Athena. Adrienne and Seth enjoyed retirement in Vero Beach, Florida. Adrienne quickly became a valued member of the community. An avid gardener and reader, she was a member of the Vero Beach Garden Club and the book clubs of the Sustainers of the Portland, Maine and Vero Beach Junior Leagues which provided many hours of joy.

Adrienne’s life was also one of service to others. In New Jersey, she was a valued member of the Junior Leagues of Monmouth and Mercer County, N.J. She later served as the State Chairman of the Sustainers of the New Jersey Junior League, and was the proud founder of the Vero Beach, Florida Sustainers organization.

She was also served as Chairwoman of Planned Parenthood organizations of Ewing and Monmouth, N.J. counties. Adrienne was also very committed to the Florence Critten Home for Unwed Mothers holding many positions including President in the 1960s. She served on the Board of the Union Industrial Home of Trenton, N.J., and was a member of the New Jersey Women’s Volunteer Association, serving at the orthopedic hospital in Trenton, New Jersey.

Adrienne’s grace, kindness, and compassion for others was treasured by her friends and family. She will be deeply missed. A celebration in Adrienne’s honor will be held October 12th, 2019. Interment will be private.