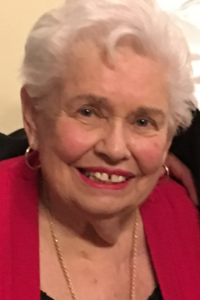 Mrs. Joan L. (Billings) Pappalardo, a resident of Brooksby Village in Peabody, formerly of Medford and beloved wife of the late Louis John Papprlardo, passed away at the Kaplan Family Hospice House in Danvers on Friday morning, September 13, 2019. She was 86 years old and the companion of John Murphy of Brooksby Village.

Born in Boston, Massachusetts, on August 18, 1933, she was the beloved daughter of the late Henry J. and Audrey L. (Wentzell) Billings. Joan earned her nursing degree from the Lawrence Memorial School of Nursing and was employed as a Registered Nurse at the Massachusetts General Hospital in Boston for more than 38 years, where she held many instructor and leadership positions. She was also employed by the Lawrence Memorial Hospital in Medford, for more than 5 years. Joan also spent one year a Surgical Assistant for Dr. Michael Nash, MD.

An active woman, Joan was a Co-founder and Vice President of MADD in Greater Boston and she was a former leader of the Girls Friends Society at the Grace Episcopal Church in Medford. Joan was also a member of the Altar Guild and performed in many Talent shows at the church. She was an RN Liaison to the Renaissance Gardens and the VNA. In more recent years, she was a member of the Board of Directors at Brooksby Village and loved to sing Karaoke at Brooksby. She also was Host at TV9 Village View, of Health Tips and was a member of the Let’s Dance Committee. Joan worked at the Brooksby Flu Clinic, was a resident speaker and loved to play Table Tennis. She was also a member of the Red Hat Society and the International Society of the “Toast Master”. Joan and her companion, John, traveled the world. She loved celebrating the holiday’s, cooking pasta dinners and her famous chocolate chip cookies. Above all, Joan was a very devoted wife, mother, grandmother and friend. She will be dearly missed.

She is survived by her loving children; Linda Jean Pappalardo of Ellington, Florida and JoAnne and her husband Steve Cooperstein of North Andover, siblings; Henry and his wife Melissa Billings of Lebanon, New Hampshire and Esther Catalano of Ohio, sisters-in-law; Roxanne “Roxie” Billings of Wakefield and Grace Baglione of New Hampshire, grandchildren; Alexander, Cameron, Benjamin and Jonathan, son-in-law; Mike Benishek of Ellington Florida and many nieces and nephews. Joan was also the mother of the late John Michael Pappalardo and John Henry Pappalardo, sister of the late Billy Billings and sister-in-law of the late Susan Billings, Frank Baglione and Arnold McNutt.

Her Funeral will be celebrated in the Grace Episcopal Church, 160 High Street, Medford on Monday, September 16, 2019, at 11 AM. Relatives and friends are most welcome to attend. Visiting hours will be held in the Beals-Geake-Magliozzi Funeral Home, 29 Governors Avenue, Medford on Sunday, September 15, 2019, from 4 to 8 PM. Interment will be held in the Oak Grove Cemetery in Medford. In lieu of flowers, donations in Joan’s memory may be made to the Resident Care Fund, C/O Philanthropy Office, 200 Brooksby Village Drive, Peabody, MA 01960. For additional information, please visit, www.magliozzifuneralhome.com.