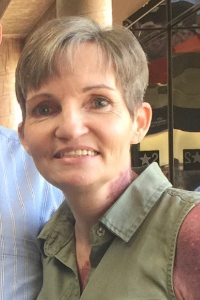 
When thinking of Rita, one word comes to everyone’s mind. Strength. She demonstrated her strong will each and every day. When she made up her mind about something, she made it happen or at least, she made every effort to accomplish it. For example, her five children. While only half of the ten she wanted when she was younger, she felt fulfilled in every way. And everyone knows the story of when Rita was eight years old and set her sights on Jeffrey Keith Moore. She had to wait ten years for him to notice her, but you better believe he never had a chance!
Rita was born to Bill and Sandy Richards in Kennewick, WA. June 1st, 1966, eighteen minutes ahead of her twin sister Robin. The two of them, along with their six siblings, grew up in Grandview, in their family gravel pit. Both girls were little tomboys, following their big brothers everywhere, happy to play in the dirt in the summers and snow in the winters. It was there, Jeff asked Rita to marry him and made all her dreams come true. They were married in December of '85 and welcomed their first child, Dacia, ten months later. Spencer soon followed, along with Britnie, Jared and finally their baby girl Pyper, fourteen years later.
Rita took delight in her grandchildren, whom she loved immensely. She always told everyone, her granddaughter Faye was her physical therapy and little caregiver. And a day with Harrisen and Haylen brought a smile to her face. She loved holding them and playing with their hair and taking pictures of all three of her grandbabies.
Rita loved caring for people and set out to work in the medical field. Her job as an ER Tech at Kadlec Hospital, was her passion, she never felt more in her element than when she was at work. Even after she became disabled and could no longer pursue her career, she loved reminiscing with all her friends and former co-workers whenever she would stop by.
Rita was baptized as one of Jehovah's Witnesses when she was fifteen years old and even though she struggled with more medical issues and pain than anyone could stand, her love for Jehovah persevered and her family looks forward to seeing her in the Paradise, happy and healthy and running circles around us all again.
Rita passed away Thursday September 5th, 2019 in the comfort of her own home. While our world may ever be the same, our family takes comfort knowing she did not suffer in the end and that she will never feel pain again.
Rita was survived by her devoted husband Jeff and their five children. Dacia and Terrell and their child Faye Thompson, Spencer and Hilary Moore, Britnie and Branden and their children Harrisen and Haylen Parli, Jared and Emily Moore and Pyper Moore.
She was Preceded in death by her Father Bill and Big Brother Greg Richards and survived by her mother Sandy Richards, Her Brother Brent, Sisters Billie and Brenda, Brother David, Twin Sister and Her Other Half, Robin, Brother Aaron and a large support group of family.

We Will See You Soon.

Memorial services will be held at 2:00 p.m. Saturday, September 14th in the Kingdom Hall of Jehovah’s Witnesses, 330 Nunn Road in Prosser. You may leave a message for the family at www.Prosserfuneralhome.com