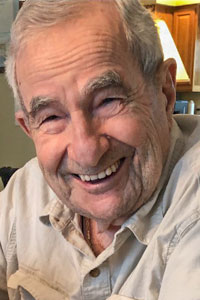 Harry Berj Telian passed away peacefully on September 7, 2019 at 93 years old. He was born in Syracuse, New York, to parents Hagop and Venus Telian.

Harry was raised in a small and vibrant, Armenian community. Always a bright student, Harry began Syracuse University at a mere seventeen years old. However, after his freshman year, Harry decided to enlist in the Army-AirForce and served his Country during World War II. In 1946, Harry went back to Syracuse graduating in 1949.

Harry was always hard working. His career reflects his talents as a bright, friendly, people person with a knack for sales. At a young age, Harry worked in the family dry cleaning business while selling mutual funds at night. His work ethic soon led to ownership of his own laundromat. With an insatiable thirst for a challenge, Harry ultimately sold the store and began to pursue his passion for sales and finance full time. Harry became a stock broker.

Some years later, as they were expecting their fourth child, Alice, Harry was hired by a Boston firm and Joyce finally convinced him to move to Boston. Harry and Joyce welcomed their fifth child, Lisa into the world as they settled into Dedham, Massachusetts. He finished his career as regional vice president for The John Nuveen Company.

Harry retired at 65 and much to his surprise truly enjoyed his retirement. He served on the Board of Trustees of Saint Stephen’s Armenian Church even running the bazaar for a few years. Retirement allowed Harry and Joyce to travel and take cruises, visit their children, babysit for their granddaughter, Valerie, bowl and play tennis.

Harry was a lifelong learner, always eager to take a computer or cooking class, read a new book or try out something new he read about on the computer. He loved watching the stock market and calling into Mad Money and other financial programs. Harry will be remembered most for his huge heart, twinkling eyes, big smile, and incredible generosity.

Harry was the epitome of a good husband, the most loving father, as well as the proudest grandfather and great grandfather. Harry is survived by his wife of seventy years, Joyce Telian, his younger sister, Alice Najarian, his children Jack and wife Cathy, Karen and husband Steve, Alan and wife Nancy, Alice and husband Larry and Lisa and husband Rich; their seven grandchildren, Lani and husband J.R., Adam and wife Michelle, Valerie and fiance Chris, Tyler, Victoria, Samantha and Alexandra, his three great grandsons and countless relatives and close family friends.

Relatives and friends are kindly invited to attend Harry’s Funeral service at Saint Stephen's Armenian Church, 38 Elton Avenue, Watertown on Tuesday, September 17 at 11:00 a.m. At the request of the family, there are no Visiting Hours. In lieu of flowers, memorial gifts may be made to The Leukemia & Lymphoma Society, Donor Services. PO Box 98018. Washington DC 20090-8018. https://donate.lls.org/lls/donate . Interment at Mount Auburn Cemetery, Cambridge. Arrangements by Aram Bedrosian Funeral Home, Watertown.