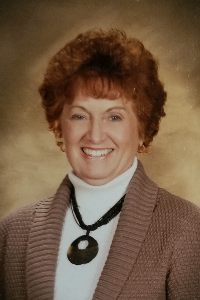 Mary Alice Collins, 80 of Markleville, went to be with her Lord on September 9th, 2019 at 7:21 P.M. in her home after a long battle with cancer.
She was born on March 7th, 1939 in Lapel, to Ovie and Helen Rushton. She was married to Darl Collins on June 21st, 1959 at Sugar Grove United Methodist Church.
She was a retired Home Ec teacher from Greenfield Central after 18 ½ years, a member and elected state president of ADK, Home Interiors consultant and top sales representative (Miss Indiana) for 30 years, and state fair exhibitor for 60 years-where she was awarded the Master Baker and Lifetime Achievement award by Bob Cherry.
She is survived by her husband, Darl Collins; son, Curt (Janet) Collins; daughter, Melissa (Eddie) Franklin; seven grandchildren: Jeremy, Joey, and Corrine Collins; Corbin, Alayssia, Chloe, and Connor Franklin; two great-grandchildren-Paisleigh and Jaxon; sisters, Wilma (Max) Kennedy, Pauline (Richard) Jones, Kathleen (Howard) Willis; brother, Kenneth (Carolyn) Rushton, and several nieces and nephews.
She is preceded in death by her parents, Ovie and Helen Rushton.
Services will be held at 1 p.m. on Saturday, September 14, 2019 at Markleville North Christian Church with Rev. John Hackney officiating. Burial will follow at McCray Cemetery in Wilkinson.
Visitation will be at the church on Friday, September 13, 2019 from 3 to 8 p.m. and Saturday from 10 a.m. until the service at the church.
Donations can be made to Markleville North Christian Church and the Sue Wortman Cancer Center in Greenfield, Indiana.
Rozelle-Johnson Funeral Service was in charge of the funeral arrangements.
Post online condolences at www.rozelle-johnson.com