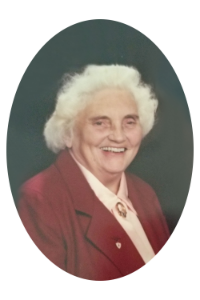 Grace (O’Malley) Broderick, age 96, of Brockton, died peacefully, September 9, 2019 at St. Joseph Manor. Grace was the wife for 52 years of the late Patrick J. Broderick. Born in Thornton, England, she was the daughter of the late James T. and Rose (Barrett) O’Malley. Grace was raised and educated in England and Ireland. During WWII she served with the Royal British Army for five years. Following the war, Grace immigrated to Canada, then to the United States, and finally settled in Brockton in 1971. Grace was a hardworking, tenacious, and resilient woman devoted to her faith and her family. In addition to raising her children, she held many varied jobs. She was an avid gardener and also enjoyed crafts, music, and dancing. She was a former member of Ireland’s Own and communicant of Our Lady of Lourdes Church.

Visitation will be held in the Conley Funeral Home, 138 Belmont Street (Rte 123) Brockton, Thursday, September 12, 4:30-7:30pm. The funeral procession will gather at the funeral home Friday at 8:45am for a Funeral Mass in St. Joseph Manor at 9:45am. Burial will follow in St. Thomas Aquinas Cemetery, Bridgewater. Donations in Grace’s name may be made to the St. Joseph Manor Pastoral Fund, 215 Thatcher Street, Brockton, MA 02301 or the Chapel of Our Savior, 475 Westgate Drive, Brockton, MA 02301.