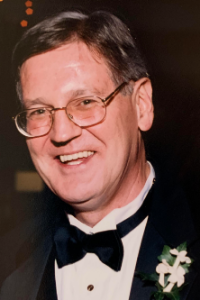 Paul Anthony Barringer, a resident of Middleton and formerly of Wellesley, Scituate, Cobham (England), and Charlestown, entered into eternal life at his home in Middleton on Monday, September 9, 2019. He was 76 years of age.

Paul was born at Boston City Hospital on June 4, 1943. Raised in Charlestown, Paul was the youngest of the late Walter and Helen (Silva) Barringer’s six children. He attended St. Francis De Sales Parochial School, The Boston Latin School, Harvard College, and Boston University. His football prowess helped him navigate from Charlestown to Boston Latin and on to Harvard. He is a member of the Boston Latin Hall of Fame. Following college, his professional career began at Gillette and then he transitioned to the Insurance industry, initially working for Kaler Carney & Liffler and then opening his own, Charlestown based agency, Breed’s Hill.

Paul and Jean Baldwin married in 1965 and had two children, Scott and Janet. Paul frequented the soccer fields, hockey rinks and tennis courts of the Northeast, cheering on his children in their athletic endeavors. When not attending sporting events, Paul was most content spending time with extended family, walking his dog (Paul was very proud of his dogs), playing cribbage with a close friend, mastering Sudoku or devouring the daily newspapers.

Paul was very generous with his time, volunteering at Harvard, Boston Latin and the Boys and Girls Club. He took great pleasure in and always made himself available for counseling and advising his nieces and nephews, as they navigated life’s challenges. “Bapa Paulie” is the grandfather to Kevin, Brian, Harry and Evelyn. He is the beloved brother of Robert Barringer, Helen Tanner, Richard Barringer, Rita Finn and the late Walter Barringer Jr.