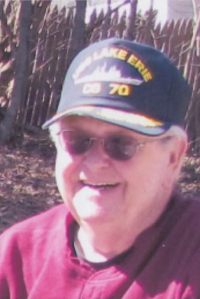 Bob was born October 3, 1939, in Bath, Maine, to parents Charles F. Johansen and Lillian May Smith Johansen. He died very peacefully at home in Westbrook, Maine, with his family, while under hospice care on Saturday, August 31, 2019.

Bob and Wendy Whitten graduated from Morse High School in the Class of 1957 and were married in 1958. Except for the past 5 years, Bob lived his life in Bath.

The State of Maine hired Bob's mother Lillian (soon to be known as “Ludie” or Nana) to be caretaker of Fort Popham. For many wonderful summers, the whole family stayed in the caretaker's house, which was located where the present Fort Popham parking lot is, right in front of the fort and the big ledge. Bob often spoke fondly of being there, though the work was hard and constant -- keeping the grounds, trash and outhouse in excellent shape -- while his mother collected a fee of 10 cents from each tourist on behalf of the State.

Bob worked 48 years at Bath Iron Works. He began as a Sweeper, moved up the ranks to become an Oil King, then went into the office management area, finally ending up at the James Building as a Supervisor. His encyclopedic memory helped him create a computer catalog of ship parts. On a project, he could usually recite from memory the part numbers, the vendors involved, and the page numbers the items were on in the catalog.

Bob was a civic-minded man and did his very best to help others. For many years, he was a volunteer fireman at the Bath fire department. He fought the Sedgewick Hotel fire and resigned soon after that tragic event. He was also a life member of Bath Lodge of Elks #934 where he was a major volunteer to install the plumbing and heating (back in the day).

Other than his wonderful family, his greatest joy was coaching Bath Little League, which he did for 26 years, eventually becoming the President. He also coached what was then known as “Bitty Basketball” at Huse School in Bath.

When Bob would “kick back” he enjoyed the Boston Red Sox or New England Patriots games, which he “coached” from his recliner. After retiring from Bath Iron Works, Bob joined the Bath Country Club where he usually played golf with his brother, Art.

Any young man who was fortunate enough to be a friend of one of our sons was accepted as “just one more of the boys.” Bob freely gave them all his advice on how to be healthy workers and good citizens.

Bob is survived by his wife Wendy and their 5 sons: Robert & partner Vickie Baker of KY;
Charles (“Rusty”) of Westbrook, ME; Arthur & wife Jude of Avon, OH; James & wife Peggy Day of Westbrook, ME; and Rich & wife Gail of Hutto, TX.

A private celebration of life will take place at a later date. Those who wish can make a donation in Bob's memory to you local Little League, Fire Department, or to dementia research.