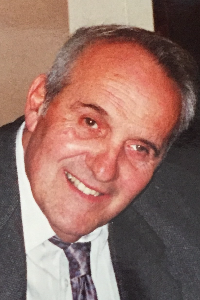 WAYLAND: Francis J. “Frank” Poisson, 85, died peacefully and comfortably on Saturday, August 31, 2019 following a brief illness.
He was born in Waltham on May 3, 1934 the son of the late Gustave J. Poisson and Cecile (DeBlois) Poisson and step-son of Antoinette Poisson.
Frank is survived by his devoted and loving wife of 58 years Patricia E. (Tolan) Poisson. Beloved father of Thomas J. Poisson; Ronald J. Poisson; Sharon E. Poisson and her fiancé Brian Schissler and William J. Poisson and his fiancé Pamela Cokin. Cherished Pepe’ of Richard DeLorey; Luke R. Poisson; Brian J. Poisson and Karly C. Poisson. He was the brother of Annette Lazili; Irene Mailhoit and the late Lucille Mercurio, Rene Poisson, Henry Poisson, Leo Poisson and twins Paul and Pauline Poisson who died as infants. Also survived by his sister-in-law Rose Poisson and many nieces, nephews and great nieces and nephews.
Frank resided in Wayland for over 48 years and spent his formative years in Waltham. He was a graduate of Waltham High School.
He established Wayland Power Equipment Co. over 60 years ago and it remains a family owned and operated business located on Boston Post Road in Wayland.
Frank was one of the original founders of the Wayland Business Men’s Association and was an active member. This group of dedicated men worked closely with the Town of Wayland to establish open lines of communication between the business community and town regulating boards. As it grew, the name was changed to the Wayland Business Association, which currently provides a scholarship to graduating Wayland seniors.
Frank was an honest and dedicated member of the Wayland community and his greatest pride and accomplishment in life was his children and grandchildren and supporting all of their endeavors. He was an avid reader of history and enjoyed watching football, especially the New England Patriots.
Visitations will be held on Wednesday, September 4, 2019 from 5:00 to 8:00 pm at the John C. Bryant Funeral Home, 56 Pemberton Road (off Rte. 30), Wayland.
His funeral services will be held on Thursday, September 5, 2019 at 10:00 am at the funeral home. Interment will follow in the Poisson family lot in Lakeview Cemetery, Wayland.