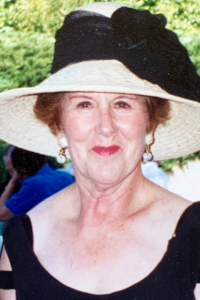 Joyce Mae Littlejohn Parry was born on September 13, 1923, in Wray, Colorado, to Gertrude (Taylor) Prentice and Floyd K. Prentice. She passed away just short of her 96th birthday on August 22, 2019, in Camarillo, California.
Along with her identical twin sister Janice (d. 1997) and her brothers Richard (d. 1942) and Wayne (d. 2005), Joyce spent her earliest years on a dairy farm in eastern Colorado, enjoying close ties with a large extended family of aunts, uncles and cousins who gathered on holidays for festive meals and lively music-making. She helped with chores on the farm, traveled to school by horse and buggy, and from an early age loved to sew, outfitting her dolls in elegant fashions of her own creation. When Joyce was 12, the family moved to Hotchkiss, Colorado, where she and Jan, both strong sopranos, sang duets at church events, joined their school chorus, and twirled batons as majorettes in the Hotchkiss High School band. They were the first members of their extended family to go on to college, attending Mesa State College in Grand Junction, Colorado, and Colorado State University in Fort Collins, where Joyce earned a B.Sc. in Home Economics in 1946. To finance her education, she worked packing peaches, pumped gas at a service station, babysat and ironed for room and board, clerked at a campus shop, and stocked supplies in the CSU chemistry lab. It was in the chemistry lab that she met Robert (Bob) C. Littlejohn of Taft, California, whom she married in June 1947 after she had graduated and taught home economics for one year in Sterling, Colorado.
Bob’s career in the farm machinery business took them first to Weiser, Idaho, then to Modesto, California (1953), and on to Pocatello, Idaho (1960), Calgary, Alberta (1967), Ogden, Utah (1974), and Litchfield Park, Arizona (1976). Two daughters, Kathleen and Gail, were born during the Weiser years, and a third, Allison, was born in Modesto.
While Joyce spent most of her adult life as a homemaker, she taught for several years at Highland High School in Pocatello, where she created a new curriculum for home economics and secured grants for a course in child development. In Arizona, she worked briefly as a real estate agent. When Bob died in a car accident in 1978, Joyce moved to Ventura, California, to be near her twin sister, and remained a resident of Ventura County for the rest of her life. In 1996, she married George Parry (d. 2016), with whom she enjoyed many happy years that included traveling across the US, vacationing on Lake Powell, and ballroom dancing with the Ventura Dance Club and La Estrella Dance Club.
Joyce whistled around the house. She always had a creative project on the go. She wrote a clever rhyming poem for every occasion. Her phone rang often, and she was generous with her time and considerable talents. She loved her wide circle of friends in the many places she had lived and the many organizations she joined over the years: church choirs, bridge clubs, sewing groups, dance clubs, the Poinsettia Club and P.E.O. When she was diagnosed with vascular dementia in 2010, her vibrant world began to diminish — but not our memory of her as a vivacious go-getter, sociable, elegant and fun-loving, who, while seldom discouraged, was occasionally heard to remark, “Well, hell’s bells!” Joyce is survived by her daughters Kathleen Morgan (Russell), Heyburn, ID; Gail Littlejohn (Tim Grant), Toronto, ON; and Allison Littlejohn, Cowichan Bay, BC; by grandchildren Tim Morgan, Karen Morgan Van Haaften, Zin Taylor and Christopher Taylor; and by great-granddaughters Natalie, Claire and Olivia Morgan. A celebration of her life will be held at a later date. Condolences to: Kathleen Morgan, 362 Foxboro Trail, Heyburn, ID 83336, or online at www.reardonfuneral.com/Obituaries.html. Donations in Joyce’s memory may be made to the Colorado State University Foundation, PO Box 1870, Fort Collins, CO 80522, or online at https://giving.colostate.edu/scholarship-support/.