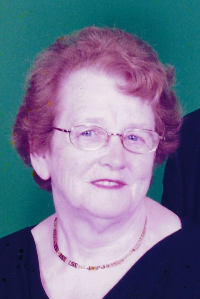 Philomena B. Donohoe, age 92, of Canton passed away August 27th at the Hellenic Nursing Home in Canton. Born and raised in County Westmeath, Ireland, she has lived in Canton for the last 17 years and previously lived in Hyde Park. She was the Owner and Chef of the Cavan House in Hyde Park for many years before retiring. She was also a former member of the Irish Social Club in W. Roxbury and a former volunteer at the Hyde Park Food Pantry.
Beloved wife of the late Peter P. “Paul”. Mother of Mary Nally and her husband Jim of Canton, Anthony Donohoe of W. Roxbury, Pauline Coyne of Readville, Peadar Donohoe and his wife Brenda of Crosshaven, Ireland, and Leonard Donohoe and his wife Elizabeth of Newton. Sister of the late Anthony, Kathleen & Pearse McCormack. Also survived by 12 grandchildren and 2 great grandchildren. She was predeceased by a grandson Seamus Nally. Visiting hours at the Dockray & Thomas Funeral Home 455 Washington St. Canton Thursday from 4-8 pm. Funeral Mass at St. John the Evangelist Church, Canton Friday morning at 10. Burial St. Mary’s Cemetery, Canton. Donations may be made in her memory to St. John the Evangelist Church 700 Washington St. Canton, MA 02021 or to Old Colony Hospice 321 Manley St. W. Bridgewater, MA 02379.