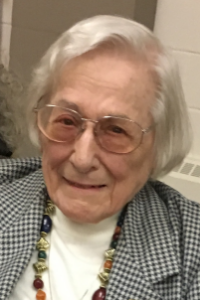 Catherine Margaret Abdelmaseh Delnore was born in Worcester on May 26, 1920, the eighth of nine children born to immigrant parents from Lebanon.   Soon after graduating from Commerce High School in Worcester, she married her childhood sweetheart, Army Lieutenant Victor Delnore.  For the next 29 years Catherine faithfully supported her husband’s career while raising their family of three children at military assignments throughout the United States and around the world.

Retiring from the Army in 1969, the couple moved back to their beloved Massachusetts, eventually settling in Boylston.  In 1998, Catherine was widowed, but remained in Boylston until 2016, when she moved to Concord to be closer to her daughter Cathy.  Her cozy apartment at Concord Park Assisted Living was filled with family photographs, paintings, and mementos from around the world.  Settled in her comfortable chair, she spent many hours watching television, taking particular enjoyment from watching the Red Sox and the Patriots.   She welcomed the visits of children, grandchildren, and great grandchildren, as well as nieces and nephews.

One of Catherine’s favorite pastimes was cooking.  She specialized in Middle Eastern food and enjoyed hosting family dinners and giving cooking advice to her younger relatives.  Another enjoyable activity for Catherine was dancing.  She and her husband were often the center of admiring attention when they stepped onto the dance floor.  Another hobby was painting, which Catherine began during the 1960’s while living in Ft. Meade, Maryland.  Her art instructor encouraged her to enter some competitions, where she won several prizes and sold many paintings.  Today many of her signed canvases are proudly displayed on the walls of her children’s homes.

During the last few weeks of her life, Catherine moved to a comfortable hospice room at Care One Rehabilitation Center in Concord.  She died on August 20.  Catherine is survived by her three children: Victor, Jr. of Fort Myers, Florida; Patricia, of Newark, Delaware; and Cathy, of Concord; six grandchildren: Jamie, Abe, David, Mary, Christy, and Rebecca; and six great-grandchildren: Lauren, Owen, Jason, Rachel, Eli, Sebastian, Ila, and Juniper. She is also survived by her sister Rachel, of Danbury, Connecticut.

Catherine was truly a woman of broad experience.  Though missing her native Worcester, she enjoyed living overseas and learning the customs of foreign lands. In Japan she helped her husband rebuild post-war Nagasaki, and later, while living in the Netherlands, she met Queen Juliana. Throughout her life, she maintained her Arabic language skills, teaching many phrases to her children.