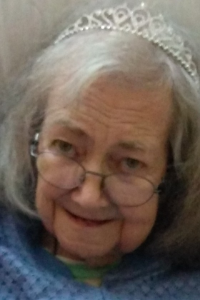 SPENCER: Patricia A. (Sinclair) Benoit, 85, of Sherman Grove died peacefully Tuesday, August 20 in St. Vincent Hospital .
Her husband Richard A. Benoit, Sr. died in 1999. She leaves a son Richard A. Benoit, Jr. of Spencer, a daughter Theresa M. Cote and her husband David of Princeton, three grandchildren; Theresa- Mary Cote of Dedham, David A. Cote and his wife Elizabeth of Waterville, VT and Maribeth Staruk and her husband William of Somerville, 5 great grandchildren, a sister Lois McGee of Lancaster, NH, several nieces and nephews.
Mrs. Benoit was born in Somerville, daughter of Earl T. and Mary Alice (Guilderson) Sinclair. She graduated from Barre High School. She was a Daycare Teacher at Becker Junior College in Worcester and previously worked in the Art Department at Anna Maria College. She was a member of Mary, Queen of the Rosary Parish where she was a longtime choir member and CCD teacher. She was a committee member and former Den Mother for Boy Scout Troop 116. She enjoyed playing cards, bingo, bowling and reading on the beach in Onset.
The funeral will be held Saturday, August 24 from J. HENRI MORIN & SON FUNERAL HOME, 23 Maple Terr., Spencer with a Mass at 11:00 AM in Our Lady of the Rosary Church, 7 Church Street, Spencer. Burial in Worcester County Memorial Park, Paxton will be private at a later date. A calling hour will precede the funeral from 9:30-10:30 AM in the funeral home on Saturday. In lieu of flowers memorial donations may be made to Oakdale Rehab. & Skilled Nursing Center Patient Activity Fund, 76 North Main Street, West Boylston, MA 01583.