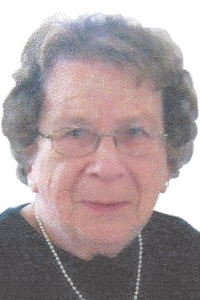 Betty was born on June 22, 1928 in Burlington, VT, daughter of the late Charles and Luella (Evarts) Norton. She was raised and educated in Vergennes, VT and earned her teacher’s training in Elementary Education at the University of Vermont and Castleton State College.

Betty was united in marriage to Conley G. Eagan in 1949 and they enjoyed 54 years together until his passing in 2003. They moved to Mansfield, MA in 1953. It was there that they raised their five children.

While Betty was a schoolteacher, upon starting their family, she chose to be a stay-at-home Mom through the years. Her children, their friends and grandchildren always knew they would be greeted by her smile, quick-wit and a homemade dessert. She and her family enjoyed lots of fun times in West Mansfield, on Lake Champlain in Vermont and Falmouth. While growing up, her grandchildren looked forward to soaking up the sun and their love during winter visits to Nana and Papa’s/Grampi’s place in Florida.

Betty was a woman of deep faith. She was a daily communicant of St. Mary’s Catholic Church for nearly 50 years. She was a coordinator of the Altar Guild, taught Religious Education, and was a long-time member of the Catholic Women’s Club. Betty belonged to Mansfield’s Council on Aging and enjoyed its various activities, along with friendships she formed along the way. After the passing of her loving husband, she took pleasure in being a volunteer at Sturdy Memorial Hospital.

May our beloved mother, grandmother and sister rest in peace and rise in glory.

Her funeral Mass, to which relatives and friends are cordially invited to attend, will be celebrated on Tuesday, August 27th at 11:00 A.M. in Saint Mary’s Church, 330 Pratt St. (Route 106) Mansfield. Burial will follow at Saint Mary’s Cemetery’s in Mansfield.