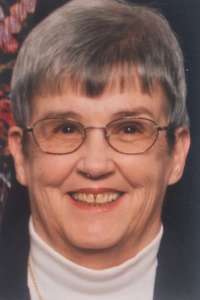 Rose Margaret (Swaters) Daugherty passed away August 20, 2019, following an extended illness.
She was born the youngest of nine children to John B., and Catharine Heimann Swaters near Montrose, Missouri. She was baptized in the Immaculate Conception Church and attended St. Mary’s grade school, and Montrose High School where she was valedictorian of her graduating class. She worked as a legal secretary until she married Francis Daugherty and they began their family in Kansas City, Missouri.
Together they moved to Anderson, Indiana when Frank was transferred to the former Delco Remy division of General Motors. They raised their family of six children in Anderson, where she was a member of St. Mary’s Church. She took great pride in her children, her grandchildren and great grandchildren. She enjoyed fishing with her family in Wisconsin and Arkansas for many years.
As a longtime member of Edgewood Country Club with Frank, she served as volunteer pianist at many sing alongs with their friends. She was a talented pianist, an avid seamstress and also loved doing beautiful needlework and crossword puzzles. Rose made friends everywhere she went and still has many loving friends, not only in Anderson, but also in Wisconsin, Arkansas, Missouri and Alabama, from their travels over the years. She enjoyed the fellowship of her neighbors and made some particularly good friends in the Community Hospital Cardiac Rehabilitation program, in which she participated for several years.
She was preceded in death by her parents and seven of her eight siblings. Also preceding her in death were her grandson Brandon, daughter Julia, and daughter Teresa.
In addition to her husband, Rose is survived by four children: Dan (Tricia) Daugherty of Anderson, Indiana; Steve Daugherty of Anderson, Indiana; Phil Daugherty of Indianapolis, Indiana, and Lisa (Wayne) Combs of Greenville, Ohio, as well as son-in-law Bran McFarland of Nixa, Missouri. She is also survived by 8 grandchildren, and 9 great grandchildren with another due to be born in October.
She is also survived by many nieces and nephews. Family will gather for a private celebration of her life hosted by Rozelle Johnson Funeral Services and internment will follow at East Maplewood Cemetery.
The family requests that those wishing to pay tribute to her donate to their favorite charity in Rose’s name, in lieu of flowers.
Post online condolences at www.rozelle-johnson.com