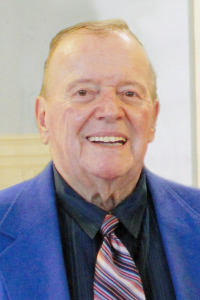 Frederick D. Cole, 90, of South Dartmouth passed away peacefully at home on Tuesday, August 20, 2019, after declining health and surrounded by family. He will be remembered for his vibrant personality and his kind heart.
He is survived by his daughter, Lisabeth J. Botelho and her husband Jose M. Botelho, Jr.; his grandson, Christian J. Botelho who affectionately referred to his grandfather as "Bibi"; and several in­-laws, cousins, nieces and nephews to whom he was known as Uncle Ted.
He is predeceased by his beloved wife, Mary Joan (Kennedy) Cole, his dear companion Claire C. Harb, his two brothers Charles D. Cole and Alton H. Cole, and his sister Joanne C. Clemmons.
Born in Worcester, he was the son of the late Charles D. and Effie (Harris) Cole. He graduated from Leominster High School and graduated from Fitchburg State College with BSE in Teaching and later also earned a Masters Degree in Education. He was drafted into the U.S. Army and served in Yokohama, Japan and then in Inchon, Korea. He earned the military rank of Sergeant and was Honorably discharged after 18 months of service.
After returning home, he secured his first teaching job in Hopkinton, MA, where he met his future wife. They later moved to Dartmouth and he began teaching U.S. and World History at New Bedford High School. He was later promoted to Department Head of Social Studies where he dedicated himself to education until his retirement in 1999 when he completed his esteemed 45 year career.
In his leisure time he was an avid reader with a profound appreciation for American history biographies. He had a deep interest in both presidents Theodore and Franklin Roosevelt, as well as Woodrow Wilson. He of course stayed on top of current events by watching the news and reading the daily paper, sometimes the Boston Globe as well.
He also enjoyed his times at Baker's Beach, broadway shows in New York City, and his summer excursions to Florida as well as to Boothbay Harbor and Kennebunkport in Maine. Most of all he loved listening to music from the Big Band era while playing with his grandson and his toy trucks.
His bubbly personality and warm demeanor will be both missed and cherished by all who knew him.
His Funeral will be held on Monday, August 26th at 9 AM from the Saunders-Dwyer Home for Funerals, 495 Park St., New Bedford, followed by his Funeral Mass at St. Mary's Church, South Dartmouth at 10 AM. Burial will follow in South Dartmouth Cemetery. Visiting hours will be on Sunday, August 25th from 3-6 PM. In lieu of flowers please honor Fred by donating to the Paralyzed Veterans of America, P.O. Box 758589, Topeka, KS 66675, or The Veterans of Foreign Wars, 406 W. 34th St., Kansas City, MO 64111.