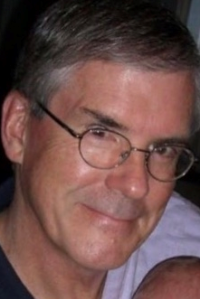 John Emmett Goggin, a retired Newburyport and North Andover high school principal and a beloved husband, father and grandfather, died surrounded by family Aug. 13 at the Stanley R. Tippett Hospice Home in Needham, after living for more than nine years with Lewy body dementia. He was 75.

He’s the nicest man in the world,” a student once told a newspaper reporter, in a sentiment shared widely and deeply by Mr. Goggin’s friends and family.

Mr. Goggin was born and raised in Denver, Colo., where he attended Regis Jesuit High School. He was a member of the Missouri Province of the Society of Jesus for 10 years, during which time he earned a B.A. from St. Louis University in philosophy and classical languages. He earned an M.A. in educational administration by attending night school at the University of Northern Colorado, joyfully working by day as a stay-at-home dad while his wife worked full time at a nearby college. It was a role unusual enough at the time to earn Mr. Goggin multiple profiles in local newspapers.

In 1972, he married Judith Medved of Tacoma, Wash., and over the next 47 years became father to two beloved children and grandfather to five adored grandchildren.

A warm, creative and gifted educator often described as a “young Mr. Chips” during his teaching days, Mr. Goggin was passionate about helping students learn and teachers teach.

“I love to be helpful to people,” he once wrote to a fellow school administrator. “That’s what got me into education in the first place. I know what I can do to create a positive school climate; to empower, encourage and even inspire teachers; to be a good role model for kids; and to encourage a school community to live up to its values.”

“Teaching and what schools do for children is at the very heart of his personality,” a school committee member said when he retired as a principal. “I feel he will have left a legacy of involving kids, teachers and parents in making them part of the school community.”

A student put it more simply: “He’s like a dad. He’s approachable and supportive of everything we do.”

Between 1995 and 2010, Mr. Goggin was an educational consultant with Collins Education Associates of West Newbury, Mass. He conducted hundreds of workshops and training sessions for teachers in schools districts around the country. He brought to each his zeal for education and his respect for teachers.

“School leaders should honor the passion, integrity, and commitment teachers have, and help them rediscover the power of that passion and that commitment,” he told a Harvard University graduate student whose doctoral dissertation explored Mr. Goggin’s implementation of organizational change at schools.

“After 20 years in education, I have not met a principal whose depth of integrity, heartfelt concern for the students, and respect for teachers surpass his,” the student wrote in the dissertation.

Mr. Goggin was loved and respected not only by his students, but by children of his wide circle of friends and family. He always had room in his heart for a new child. A tall, broad-shouldered baritone with a keen gaze and a devilish smile, he had an unexpected gift with infants in particular, and was known as “the baby whisperer” by their awestruck parents.

After retirement, Mr. Goggin found great happiness golfing and hiking in Southern Utah’s red rock and canyon country. But his contributions to his community did not end with retirement. He found purpose in the warm “aging in community” network of JP@Home, which provided opportunities for engagement and friendship for many years. He was a member of the organization’s recruitment and outreach committee and was regarded by his fellow JP@Home members as a model of grace in aging, an active community member even while living with the challenges of Lewy body dementia. His best self – his razor-sharp intelligence, dedication to learning, and commitment to fostering bonds among neighbors and loved ones – was evident until the very end of his life.

After his diagnosis with Lewy body dementia, Mr. Goggin and his wife bought a small poster that read: “Carpe (the expletive) Diem.” They embraced that spirit until the end, traveling often in his last years to enjoy art, music, and especially time with friends and family members. The disease, which is progressively debilitating, never robbed Mr. Goggin of his love for life nor his ability to share that love with those in his life. It also did not rob him of his dedication to education. Grateful to receive treatment at Massachusetts General Hospital that extended his life and quality of life, Mr. Goggin participated for five years in MGH’s neurological studies and chose to donate his brain to MGH’s Brain Bank as part of research to understand the mental changes that occur in normal aging and how they differ from those in neurodegenerative disorders.

Mr. Goggin and his wife shared a love of reading, travel, theatre and the arts, including summer weekends with family and friends at the Tanglewood music festival in Lenox, Mass. They roamed by car and train throughout the United States, Eastern and Western Europe, Egypt, Turkey, the Soviet Union, Central America, the Caribbean and Canada. An avid golfer and pickup basketball player, Mr. Goggin also loved to cook, and his elaborate picnics and holiday dinners are still the subject of conversation and praise. His 30-plus years of preparing nightly dinners earned him high praise from his appreciative wife. His family was the great love of his life.

Predeceased by his parents Mary (Novotne) and J. Emmett Sr. and a brother, Michael, of Denver, Colo., Mr. Goggin is survived by his wife, Judy; his children, Molly (Brian Foley) of Boston, and Michael (Deanna Drugg) of Burlington, Mass.; five grandchildren: Haven, Ronan and Tommy Foley, and Ellie and Hadley Goggin; and many much-loved in-laws, nieces, nephews and friends. A celebration of life gathering will be held on Friday, September 6, from 3:00 to 6:00 pm at Pierce Hall, First Parish in Brookline, 382 Walnut Street Brookline, Mass. Services will be private. In lieu of flowers, donations may be made to the Lewy Body Dementia Association (https://www.lbda.org/donate).