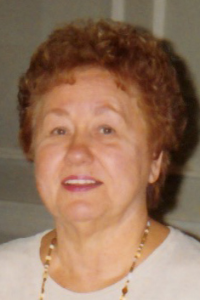 Gladys J. (Jaworski) Gaj, 89 beloved wife of the late Walter Gaj died on August 17, 2019. She shared 58 years of marriage with her late husband. She was the mother of Debra Ann Treager and her husband Jeffrey of Wausau, Wisconsin, and Walter Gaj, Jr. and his wife Brenda of Fairhaven, "Babci" as she was known by her grandchildren, was the grandmother of Adam Treager and his wife Rikki Gardonio of Herndon, Virginia, Eric Treager and his wife Katie of Appleton, Wisconsin and Emma Treager of Wausau, Wisconsin, Miranda Jean Gaj and Matthew Walter Gaj of Fairhaven, great-grandmother of Liam Mahan; sister-in-law of Wanda Jaworski, Helen Gaj, Lillian Gaj and Stanley Gaj. She is also survived by several nieces and nephews, former students and many friends.
Born in Fall River to the late Walter and Stella Jaworski, she was the sister of the late Valerie Pankowski and Walter J. Jaworski, Jr. Gladys was a member of St. Stanislaus Parish graduating from St. Stanislaus Parochial School prior to graduating from the B.M.C. Durfee High School in 1948 as one of the "Top 10 Students." During her four years of high school she was a participant on the "Youth in Review" Program featured Saturday mornings on Station WSAR singing semiclassical songs. She was also a choir member at St. Stanislaus Church.
Gladys was selected to attend the "Four-Year Teacher-Training Program" at Bryant College in Providence, Rhode Island, now known as Bryant University. She did her five-month internship at Rogers High School in Newport, Rhode Island. She began her teaching career at Marshfield High School then B.M.C. Durfee High School, married and joined the faculty at the Campbell Business School in New Bedford teaching day, evening, and summer classes. In 1955 Gladys began teaching at Dartmouth High School in the Business Education Department. She taught twenty-seven and a half years at DHS and served the last fifteen years as the Chairperson. Through her efforts she received grants for typing lab equipment, shorthand lab equipment and she co-authored the grant proposal for the computer program and the computers at DHS. Gladys received her Bachelor of Science in Business Education degree from Bryant University, her Master in Education degree from Boston University, and she participated in various seminars and courses at the University of Rhode Island.
Upon retiring Gladys joined and became a lifetime member of the YWCA where she became an avid exerciser participating in the Feeling Fit classes and later became the Exercise Leader of the Feeling Fit Club that she attended. She also joined the Bristol County Retired Teachers, a Chapter of REAM (Retired Educators Association of Massachusetts) and throughout the years served as President for three years, Vice-President, Membership Chair, Scholarship Committee Member, Advisory Committee Member, Associate Editor and Editor of the BCRTA NEWSLETTER.
Gladys was invited to become a member of DELTA KAPPA GAMMA, a Women Teachers' Honor Society, ETA CHAPTER. She received the Sara E. Chase State Scholarship for summer study at Boston University from that organization. For over fifty years she was a member of the Polish Women's Business and Professional Club of Greater New Bedford where she also served as president.
Her Funeral will be held on Thursday, August 22nd at 9 AM from the Saunders-Dwyer Home for Funerals, 495 Park St., New Bedford, followed by her Funeral Mass at Holy Name of the Sacred Heart of Jesus Church at 10 AM. Burial will follow in Sacred Heart Cemetery. Visiting hours will be on Wednesday from 4-7 PM.