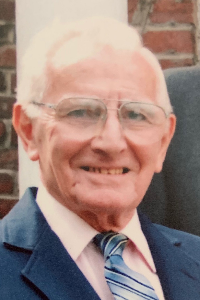 …retired from Dept. of Safety; 93
TEWKSBURY - Victor Leon Roux, age 93, a lifelong resident of Tewksbury, died peacefully at Lowell General Hospital on Saturday morning, August 17, after a brief illness. He was the husband for sixty-five years of Anne C. (Dillon) Roux, who died in October 2013.
Victor was born in Tewksbury, one of five children of the late Phaida “Joe” Roux and Maria (LeMay) Roux, and lived his entire life in “Roux Village” in Tewksbury Center. “Vic” left high school and enlisted into the U.S. Navy, and proudly served in the Boiler Rooms of the USS Murphy and the USS Kendrick in both the Pacific and Atlantic Oceans. Vic served aboard the USS Murphy as part of the D-Day Invasion Forces at Omaha Beach in Normandy, and was aboard the ship for the Secret Meetings in Great Bitter Lake in Egypt, tasked with carrying King Ibn Saud of Saudi Arabia to the historic meeting with President Roosevelt, procuring needed petroleum for the continuing war effort and laying the foundation for the eventual creation of Israel. He was awarded the European-African-Middle East Campaign, Asia Pacific Campaign, Good Conduct and WWII Victory Medals during his Navy enlistment. He was honorably discharged as a Machinists Mate 1st Class in 1947, and returned to Lowell High School to earn his diploma. But, like most modest members of the “Greatest Generation,” he never boasted about his service record and seldom spoke about his war-time experiences.
Victor landed a job with the Commonwealth of Massachusetts, Department of Public Safety, and retired as a Chief Engineering Inspector of Commercial Boilers and Powerplants.
Vic was a true “Renaissance Man,” known for his wide range of interests from salt water aquariums, photography, wine and beer making, vegetable gardening, to auto repair, boat building, and fine carpentry. Vic would immerse himself into his projects and hobbies for long periods of time, learn all there was to know on the subject, and then move on to learn a new skill or take on a new hobby. His grand project was the complete renovation of the family home on Pleasant Street, from bare walls to fine kitchen cabinetry, all crafted in his basement workshop.
He leaves a son and daughter-in-law, Lawrence “Larry” Roux and his wife Tricia (Hanneman) of Alabama; two daughters and sons-in-law, Lois Collins and her husband Terence “Terry” of Tewksbury, and Linda (Dane) Chestnut and her husband James “Cocoa” of Sebastian, FL; eight grandchildren, Stephen Roux, Daniel Roux, Andrea Gardner, Victoria Dane-Jones, Sarah Rondeau, Bethany Dane, Sean Dane, and Maria Rastas: 23 great grandchildren; two sisters, Gloria Deputat of Tewksbury, Elaine Stephens of Chelmsford; a brother Eugene Roux of Tewksbury; sisters-in-law, Rose Dillon of Templeton, Carol Isabelle of Tewksbury; many nieces and nephews; and was predeceased by his brother “Uncle Louie” Louis E. Roux, and lifelong friends, Walter Fuller and Leo Chibas.
Relatives and friends will be received Saturday morning, Aug. 24, from 9:00 a.m. until 11:00 a.m. followed by Prayers at 11:00 a.m. in the Tewksbury Funeral Home, corner of 1 Dewey and 975 Main Sts. (Rte. 38) TEWKSBURY CENTER, Ph. (8000 in MA or 978) 851 2950. Burial with Navy Honors will be in Tewksbury Cemetery. In lieu of flowers, memorials to M.S.P.C.A. Nevin’s Farm, 400 Broadway, Methuen, MA 01844, are encouraged. tewksburyfuneralhome.com