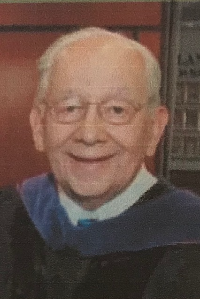 He was born November 28, 1923 in Hyde Park, MA to Rev. Guy and Louberria Outlaw. He received his Bachelor of Arts and Masters of Arts Degrees in Education from Suffolk University. He received his Jurist Doctorate Degree from New England School of Law in 1961 and was admitted to the Massachusetts Bar in 1963. He served in the United States Army Air Corps from 1943 to 1946.

Hon. Darrell Outlaw began his teaching career with the Boston School Department and then served with the Massachusetts Division of Youth Services as a teacher of emotionally disturbed children. He also served as a Probation Officer in the Massachusetts Superior Court, Suffolk County. Judge Darrell Outlaw began his career in private practice as a trial attorney. In 1967 he was appointed City of Boston Assistant Corporate Counsel. In 1979 he was appointed Chairman of the Massachusetts Commission Against Discrimination. Judge Outlaw also served as the first African American president of the Board of Trustees of the New England School of Law.

For twelve years, he was Justice of the Massachusetts Trial Court, Dorchester Division. Judge Outlaw received many honors from a variety of service organizations for his legal assistance and help, such as Roxbury’s Project Commitment and Operation Exodus’ school program. He was past president of the Bay State Lawyers’ Association, which was the foregoing organization to the Massachusetts Black Lawyers Association. Hon. Darrell Outlaw was a member and past Moderator of the Eliot Congregational Church of Roxbury.

He was preceded in death by his parents and three siblings: Juanita, Jean and Guy (Min. Pearl). He leaves to mourn his loving wife Mattie B. (Paschal) Outlaw, three daughters: Penny, Kathy and Karen, a son, Alto Spencer and his wife Caroline and their children Celeste, Madison and Makayla. He is further survived by a nephew, Tom Long (Annanita “Kitty” Watson), and a niece, Mary Outlaw. He also leaves to mourn many close friends and church family.

Relatives and friends are kindly invited to gather for a Visiting Hour at the Eliot Congregational Church of Roxbury, 120 Walnut Ave., Roxbury, on Wednesday, August 21 from 9-10AM, followed by a Funeral Service at 10:00 AM. Burial will follow at Wildwood Cemetery in Winchester. If desired, donations in his memory may be made to the Eliot Congregational Church and mailed to 56 Dale St., Roxbury, MA 02119. www.eliotroxbury.org