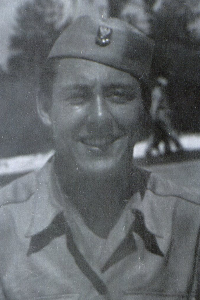 
Carl E. “Buddy” Brackett, 96, formerly of Lakeside Drive, Smithfield died Wednesday, August 14, 2019 at Overlook Nursing Home. He was the husband of the late Gloria R. (Salway) Brackett. They had been married for 60 years at the time of her death in 2008.

Born in Attleboro, Massachusetts, he was a son of the late Walter V. and Ester M. (Swanson) Brackett. He had lived in Smithfield since 1976 and had previously lived in West Warwick.

He had served in the US Army during WWII in the 660th Signal AW Company. He was a proud Veteran and was able to participate in the RI Honors Freedom Flight

Buddy was the owner of P & B Machines in West Warwick before retiring in 2005.

He is survived by his beloved niece and devoted caregiver, Kathleen Barrett of North Scituate as well as his Overlook Nursing Home Family. He was the brother of the late Sgt. Frank H. Brackett, USA, Killed In Action, 1943.

His funeral service will be held Saturday at 9:30am in the Anderson-Winfield Funeral Home, Rt 44 at Greenville Common, Greenville. Burial with military honors will follow in RI Veteran’s Cemetery, Exeter. Visitation will be 8:30-9:30am. In lieu of flowers donations in his memory may be made to Overlook Nursing Home, Patients Activity Account, 14 Rock Avenue, Pascoag, RI 02830