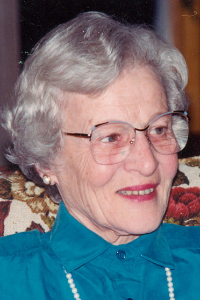 Sue was born on October 23, 1920, in Laconia, NH, the daughter of the late Horace J. and Antoinette (LaChance) Dorval. She was the middle child in a loving family of eight sisters and two brothers. Sue lived in New Hampshire her entire life, enjoying the lakes, mountains, and raising her family there.
Sue worked at Laconia Eye Associates for 20 years as an administrative assistant and was happy to be serving in the medical community. Sue cared for her many friends and acquaintances in and around Laconia and always would put others before herself.

Sue was a devoted member of St. James Episcopal Church, serving on the Altar guild, craft committees, and prayer circles. She was very accepting and warm to all those she faithfully served with.

Sue loved to travel and go on cruises with her husband, playing cribbage and Mah Jonng with her family, her pets, and kept active outdoors. She enjoyed tending to her veggie garden, growing beautiful flowers, and participating in the outings and activities at Taylor community. Sue was a fun-loving grandmother who cooked and served abundant feasts when gathered at Shore Drive in Laconia in summertime and at Christmastime.

For those who wish, the family suggests that memorial donations be made in Sue’s name to the St. Frances Healthcare Center, Activity Fund, 406 Court Street, Laconia, NH 03246.

Wilkinson-Beane-Simoneau-Paquette Funeral Home, 164 Pleasant Street, Laconia NH is assisting the family with the arrangements. For more information and to view an online memorial go to www.wilkinsonbeane.com.