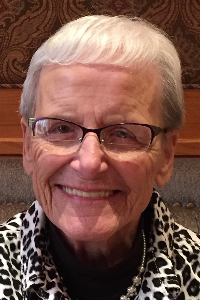 A bright light has left this world. Jeanne Delores McEnaney Belisle - pastoral minister, devoted wife, joyous friend, and loving mother - succumbed to congestive heart failure/stroke on August 10, 2019, and the next realm is the brighter for it.

Jeanne was the fourth of four children born to Dr. Clifford and Alice McEnaney in Owatonna, MN, on February 11, 1935. Growing up, she spent many happy summers on Gull Lake - waterskiing, swimming, and seeking out all variety of social activities - as “we Irish” are inclined to do. Jeanne graduated from Owatonna High School and then from the College of St. Catherine in 1957 with a degree in Political Science.

A lifelong singer and dedicated Roman Catholic, Jeanne joined the Dominic Club of St. Paul - a Catholic singles organization - after college. She became an officer, performed in every variety show the Dominic’s produced, and she met her future husband - Jerome “Jerry” Belisle - who survives her, following over 58 years of marriage.

Jeanne and Jerry were married in Owatonna on June 17, 1961. The next year they moved to Oakdale and joined Transfiguration Catholic Church; these two growing communities were their lives for the next 50 years! Her children survive her: Michelle Duncan of Brookings, SD; Patrick (Jane) Belisle of Charlottesville, VA; Jennifer Belisle of Hudson, WI; and Gregory (Amie) Belisle of Portland, OR; plus 12 beloved grandchildren and 2 great-grandchildren. All agree that Jeanne was an amazing mother - very loving, thoughtful, and playful (even into old age!).

Over the years, Jeanne volunteered as church choir member and director, lay minister, leader of the Mrs. Jaycees, and dedicated helper in MN Republican politics - where she eventually became a staff person for Gov. Al Quie. She worked as a substitute teacher, secretary at 3M, then reassessed her skills and passions and went back to St. Kate’s to become credentialed as a Pastoral Minister - a role she adored. She ministered for many years at St. Thomas the Apostle, modeling loving service to all she touched. Jeanne also started the homebound ministry at Transfiguration and the befriender program at 3M for families who lost a loved one.

After retiring, Jeanne and Jerry traveled the world: Ireland, U.K., Mexico and Central America (including a Panama Canal cruise), China, and 11 Eastern European countries, plus most of the U.S. She played bridge, played golf, splashed with her synchronized swimming gals, and loved being social with her wonderful family and friends.

Jeanne streamed light into the life of every person she met (and she never met a stranger!). How she loved to laugh. Her genuine warmth, heartfelt kindness, and unstoppable effervescence was obvious to all. Guaranteed entry into the next realm on the arms of those she has served, God will look upon Jeanne and say, “Well done, beloved servant. Rest now. Your race is won.”