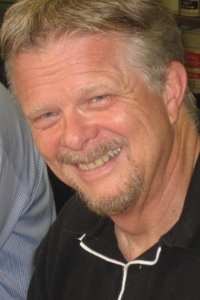 Terry Blake Stevenson passed away suddenly on August 12, 2019 from heart failure after surfing at Zuma Beach in Malibu. Terry is survived by his wife, Mary, together for approximately 40 years, and two sons, Devin (his Celtic name means Poet, Terry would proudly explain), and Rich, a retired CHP Officer, and his wife Charlotte. He is predeceased by a brother, Tim. Terry and Mary resided in Simi Valley, California.

Except for a short period while a toddler, when his father’s job for the movie studios moved the family to Hawaii, Terry has either lived or worked in Burbank, until he retired from the City of Burbank in December 2014. Terry even went to kindergarten with former Burbank City Manager Mary Alvord and graduated from Burbank’s John Burroughs High School before ultimately earning his college degree in 1972 from California State University Northridge (political science and government), and his law degree from Loyola Law School in 1976.

After unsuccessfully running for California Assembly as a Libertarian candidate in 1982, he refocused on his legal career, bringing his lifelong interest in public policy and public service to bear on his work in the Burbank City Attorney’s Office, where he enjoyed an illustrious 38-year career. Terry quickly rose to the top City Prosecutor position, before eventually litigating civil cases. He ultimately found his niche, however, advising city departments and the City Council on difficult legal issues ranging from employment law to public works construction. Outside of the Office, Terry was a member of the Federalist Society, as well as an avid participant in debates on constitutional law. But it was Terry’s wide-ranging interests and knowledge in various topics beyond the law that truly set him apart. Terry could speak knowledgably and passionately on just about anything, ranging from the philosophies of ancient religious sects, to the violent mating habits of sea slugs.

An accomplished poet with a deep literary and personal appreciation of Los Angeles, he saw his poem “LA” published in Garrison Keillor’s 2011 anthology, Good Poems American Places. Many of his other poems have been published in books edited by the celebrated poet Jack Grapes, with frequent readings at Beyond Baroque. After retirement, Terry focused much of his time on poetry, recently taking classes from Mr. Grapes’ son Josh, who affirms that “Everyone in the LA poetry scene loved Terry a whole lot”. Terry’s poems have appeared in Electrum, Poetry/LA, Rattle, Spillway and ONTHEBUS. He has been published in the anthologies, Shards, Off-Ramp, Corners, The New Los Angeles Poets, Truth and Lies that Press for Life, 13 LA Poets, So Luminous the Wildflowers: An Anthology of California Poets, Beyond the Lyric Moment: Poetry Inspired by Workshops with David St. John, Master Class: The Poetry Mystique ed. by Suzanne Lummis, and Went to Ralph’s to Get a Chicken (poems for Jack Grapes).

During the summer months, Terry could be found surfing at his favorite Southern California beaches, having mastered the sport at breaks like Sunset and Topanga during his younger days.

While hair styles, job responsibilities, and poetic style have changed over the years, the through-lines of his passions remained constant. He was a loyal husband and wonderful father to his two sons. Family was a priority: Terry loved doing anything with Devin and Rich (especially Dodger games and concerts), as well as spending time at home with his wife. Terry’s other longstanding love, his fascination with Paramahansa Yogananda motivated him to start his work day with a 4:30 am meditation. (After retirement, he meditated at the late hour of 6am.) And while the fantasy of basketball greatness was crushed early on by an inability to dunk, Terry’s love affair with basketball and the Lakers remained undiminished.

As busy in retirement as he had been in his distinguished legal career, Terry in recent years enjoyed a near-perfect retirement, filled with daily workouts, poetry, art exhibits, museum visits, music, and lunches with friends. He even squeezed in volunteer work at the Skid Row Reader, and recently taught classes at the Osher Lifelong Learning Institute (OLLI) on constitutional law- his favorite topic- at California State University Channel Islands.

His friends, varied and wide, can attest to his great big heart and how his multi-faceted expertise and contagious enthusiasm for life inspired all of the lives he touched. He was, and is, very well loved, and very, very much missed.

On September 10, 2019, the Burbank City Council meeting will be adjourned in honor of Terry.