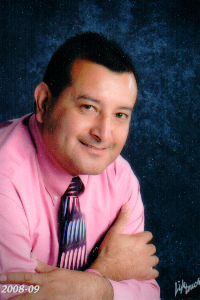 Gerardo “Jerry” Castilleja, age 56, passed away surrounded by his loving family on Thursday, August 8th, 2019 after bravely battling cancer for six years. Jerry was born on September 9th, 1963, in Prosser, Washington, to Sebastian and Maria Rodriguez Castilleja. He graduated from Prosser High School in 1982 where he excelled in varsity wrestling and football and met his lifelong friends. Jerry later completed his higher level of education at Yakima Valley Community College where he received an AA degree in Chemical Dependence so he could later serve his local community in any way possible.
Jerry married his love of his life Mary Guzman on May 25, 1985 in Wapato, WA. They moved to Prosser where they raised their two children Stephen and Stephanie Castilleja. Family meant the most to Jerry as his favorite role of a lifetime was raising his children and being involved in their lives with his love and best friend Mary always by his side.
Jerry’s charismatic and larger than life personality paired with his sharp sense of humour, iconic smile and contagious laughter enabled Jerry to partake and adore many hobbies and community engagements. He lit up every room he entered and enjoyed sharing his eagerness towards life and happiness whether it was displaying his appreciation for music as a DJ or showcasing his love of cars during car shows as a member of Classic Knights Car Club. Jerry was also a proud member of the Prosser Sacred Heart Catholic Church for his entire life and a member of the Knights of Columbus.
Jerry found his main calling counseling and mentoring the most vulnerable members within his local community. He served Granger High School by working as a Home Liaison and a Mental Health Counselor where he tirelessly devoted all that he could to assist at risk students, families, and staff in need. When the school day was over, he continued his mission to help anyone he could through his second job as a co-owner of the Integrity Support Services in Grandview as a Chemical Dependency Counselor. He never forgot anyone he had the privilege of helping as each student and person left just as big of a mark on his life as he did theirs. His unwavering commitment to protect his community led him to became a reserve law enforcement officer for the city of Granger. Even though he had to retire from this role during his six-year battle with cancer, he always persevered with his lighthearted outlook on life so he could enjoy every day God had given him.
Jerry is survived by his loving wife of 34 years Mary Guzman Castilleja, and his son and daughter Stephen and Stephanie Castilleja. He is also survived by his parents Sebastian and Maria Castilleja of Prosser, his loving sister Mary Rodriguez (Sergio) from Grandview, mother-in-law Celia Guzman of Wapato, brother-in-law Tony Guzman of Wapato, sister-in-law Cruz Garcia (David) of Wapato, brother-in-law Rick Guzman of Wapato, and numerous nieces and nephews. Jerry and Mary would also love to express their heart felt thank you to their adoptive daughter Angelica Rodriquez and her wonderful family for their unwavering love and support.

A Mass of Christian Burial for Jerry Castilleja will be celebrated on Friday, August 16, 2019 at 12:00 pm at Sacred Heart Catholic Church in Prosser. Concluding services and burial will follow in the Prosser Cemetery. The Rosary will be recited on Thursday, August 15th at 6:00 PM at the Prosser Funeral Home.