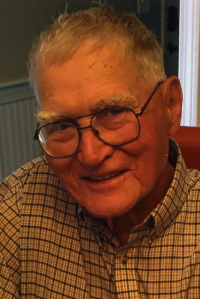 Goffstown- Pinkney “Oakie” Blankenship, 90 died August 7, 2019 at Catholic Medical Center after a period of declining health with his family by his side. He was born on December 17, 1928 in Pollard, Oklahoma. He was the youngest of four children born to Pinkney and Mary (Clowers) Blankenship. At age seventeen, Pinkney left high school to enlist in the United States Airforce. He served his country proudly and his military career took him to places such as Japan, Alaska and eventually New Hampshire.
It was 1949 during his assignment at Grenier Airforce Base in Manchester that Pinkney (by then known to friends and colleagues as “Oakie”) was fixed up on a blind date with the beautiful Juliette Carignan. Oakie was smitten and he convinced Juliette to marry him in 1950. They went on to have three daughters, Doris, Debbie and Doreen. Oakie enjoyed gardening in his spare time and his family enjoyed his homegrown fruits and vegetables on the dinner table every night.
After his honorable discharge from the United States Airforce, Oakie became a professional truck driver for companies such as Jac-Pac and Donovan Equipment.
Oakie and Juliette settled in a quiet Pinardville neighborhood and their neighbors became lifelong friends. When Juliette began to show signs of dementia, Oakie was her faithful caregiver. His devotion to her continued after she transitioned to a local nursing home. The nursing staff there nicknamed him “Romeo” because he visited his beloved Juliette every day until her death in 2010.
Oakie was a proud and independent man who loved the Boston Red Sox, his friends at the American Legion Jutras Post 43 and his family. He is survived by daughters Doris Blankenship and Doreen Blankenship, grandchildren Shannon Hersey, Tim Hersey and his wife Heather, Alex Blankenship, and great-grandchildren Charlotte and Benjamin Hersey. He was pre-deceased by his wife Juliette (Carignan) Blankenship and daughter Deborah (Blankenship) Forestburg.
A memorial service will be held at the New Hampshire State Veterans Cemetery in Boscawen on Thursday, August 15, 2019 at 1pm. In lieu of flowers, memorial donations may be made to the American Legion of New Hampshire.