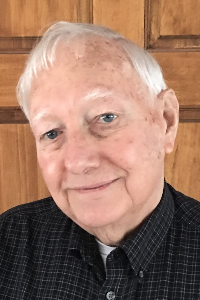 Edward Thomas Eagen, 79, of New Boston NH, passed away unexpectedly on August 7, 2019 surrounded by his family. He was born to John J. Eagen and Mary A. Stapleton Eagen, on September 10, 1939 in Montclair, New Jersey. Ed graduated from Bloomfield High School in 1957. He served in the US Navy on the USS Boston Missile Cruiser from 1963 to 1965. He received a degree in electrical engineering from Newark College of Engineering in 1968. He is survived by his wife of 54 years, Shirley Eagen, his daughter and son in-law Carolyn and Mark Simmons and their sons Kevin, Matthew and Nathan, daughter and son in-law Kim and Derek Danis and their children Lauren and Brady, son and daughter in -law Brian and Christina Eagen and their son Sam, son Scott Eagen and his sons Bennett and Colin, and son Jeffrey Eagen. He is also survived by his siblings Jack Eagen, Noreen Toglia, Pat Plank, Karen Lashuk and husband Walter, Linda Lavacca, Richard Eagen and wife Linda. He was predeceased by two sisters, Joan Rush and Mary Bender.

Ed worked as an operations manager for various manufacturing companies. In his retirement he gave back to the business community by mentoring small business owners and entrepreneurs. His family will remember him for his love of the holidays and the traditions that he left behind. Ed enjoyed spending time with his children and grandchildren and coaching their numerous sports teams and clubs. He loved spending time in his garden and was an avid reader who read anything he could get his hands on; especially the daily newspaper and history books. Ed was an inspiration to all who knew him and will be remembered for his kind heart and optimism.

SERVICES: Calling hours are Monday August 12, 2019 from 3 to 6 pm at J.N. Boufford & Sons, 110 Bridge Street, Manchester, NH. There will be a mass of Christian burial on Tuesday, August 13, 2019 at 9:00 am in St Elizabeth Seton, Meetinghouse Rd, Bedford, NH followed by a burial in New Boston Cemetery. In Lieu of flowers donations can be made to the Myelodysplastic Syndrome Foundation at https://www.mds-foundation.org For more information or to sign an online guest book, visit bouffordfuneralhome.com.