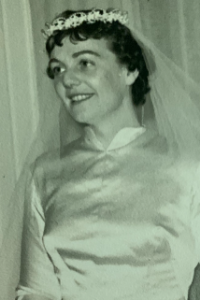 Patricia O’Sullivan was born in Cwm, Wales, the eldest child of Dr. Florance O’Sullivan and Eileen (Lewis) O’Sullivan. After spending her early years in the Welsh valleys, the growing family moved to London where her father continued his medical practice. Pat always regaled her children with stories of the WW 2 years in London, ration books, unexploded bombs in the attic and nights spent in the air raid shelter.

She enjoyed a successful career in Glaxo, and married Jeffrey Shearley in 1957. Together they raised three children, Catherine, Elizabeth and Richard.

In 1970, Pat and Jeff made a bold leap of faith and left London to run a hotel in Co Kerry, Ireland. They owned the Falcon Inn for six years, during which time many good friendships and memories were made.
Having sold the hotel, they ran a guest house, Glen Caragh, for several years and from there to a three acre property in Stook Island, Cromane to run a plant nursery business.

Sadly, Jeff passed away on January 10th 1983 and Pat continued to live in Stookisland, working in various local businesses.

In 2006 Pat relocated to Hyannis, MA, and spent the next thirteen years living with her son Richard and daughter-in-law Mary. She passed peacefully at home with them.

She was preceded in death by her parents Florance and Eileen, her husband Jeff, her brother John and sisters Ann, Adrienne, Diana and Sheila.

A memorial service will be held at 11:30am on August 27th. at Our Lady of Victory, 230 South Main Street, Centerville and funeral will be at a later date in Ireland. May she rest in peace.