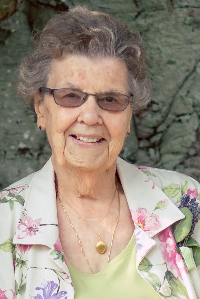 Margaret Orr (Nutter) Alexander, 92, of East Bridgewater, died peacefully in her home surrounded by her family on Monday, August 5.

Margaret fondly recalled memories of growing up in East Bridgewater, vacationing at Newfound Lake in New Hampshire, and waitressing at the Toll House in Whitman. A 1944 graduate of East Bridgewater High School, she went on to graduate from Brockton Business College, and marry her childhood sweetheart, Dick, in 1946.

She worked as secretary to the superintendent of East Bridgewater schools for 22 years and was active in the Massachusetts Association of School Secretaries.

She served on countless town and local committees, including the Old Bridgewater Sesquicentennial, Civil War 100th Anniversary, 150th Anniversary of the Incorporation of East Bridgewater, Finance, Insurance Advisory, and Bannerman Property Ad-Hoc committees. She was also a long term member of the East Bridgewater Historical Commission, Old Bridgewater Historical Society, Women’s Club, Garden Club, and Daughters of the American Revolution (DAR). An avid historian and skilled genealogist, she was named Honorary Historian of the Town of East Bridgewater by the Board of Selectmen in 1998. She was honored as Grand Marshall in the Kiwanis Club’s Christmas parade, as the Citizen of the Year by the Rotary Club of the Bridgewaters, as a recipient of the Deborah Sampson Chapter and National DAR’s Community Citizens Award, and as a Legends & Legacies honoree of the Anne Hynes Memorial Scholarship Fund.

She was involved with the East Bridgewater Central Cemetery for over 50 years, serving as superintendent for 5 years, and took great pride in documenting historical graves and obtaining grave markers for 12 veterans of the Revolutionary War, War of 1812, and Civil War.

Visiting hours will be held Thursday August 15 from 4pm to 8pm at the Blanchard Funeral Chapel, Plymouth Street (Rte. 58 at the rotary) Whitman, MA. Burial will be private.

In lieu of flowers, donations may be made in Margaret's name to Old Colony Hospice, 321 Manley Street, West Bridgewater, MA 02379.