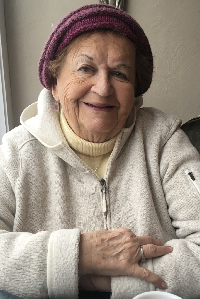 Lola Berta Kretch Yellen of South Portland, Maine and Daytona Beach, Florida died peacefully on Tuesday, August 6th surrounded by her family and friends. She was 91 years of age.

Lola was born on December 15th, 1927, the second child of William and Bertha Kretch of Bronx, New York. She graduated from New York University at 20 years of age, studying sociology and receiving a Bachelor of Arts degree.

After graduating from NYU, Lola worked for the Johnson O’Connor Research Foundation in New York City and volunteered at the New York City Mission Society.

Lola married Donald Yellen of Fishkill, New York in1954 and together they raised 6 children.

She is predeceased by her husband Donald Yellen who passed in 1986.

Lola’s family will hold an open visitation and wake at her home on 94 Willow Street in South Portland, from 2 p.m. through 10 p.m. on Thursday, August 8th.
A funeral mass will be held on Saturday, August 10th at St. Mary’s Church in Fishkill, New York.  Burial will follow at the Fishkill Rural Cemetery.