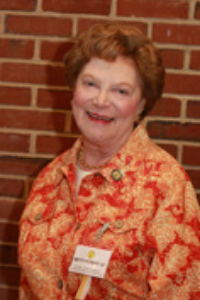 Worcester - Betty L. Forest, R.N., 94, died on Saturday, August 3, 2019 at home. Born on July 10, 1925, New York, NY, Betty was the only child of Loretta (Abrams) and Harold Van Rensselaer Forest. She completed high school, went on to earn a college degree in nursing, and then a PhD in Education. She founded the nursing program at Quinsigamond Community College in Worcester and was the director for many years. Betty was a member of Saint Michael's on-the-Heights Episcopal Church. She was also a member of the Worcester Art Museum, Worcester Women's Club, Music Guild, and Opera Worcester.

A Memorial service will be held on Saturday, September 28, 2019 at 11:00 a.m. in St. Michael's on the Heights Church 340 Burncoat St. Worcester. Memorial donations may be made to the charity of the donor's choice.

An article about Dr. Forest from her alma mater, Adelphi College Alumni publication 2012:

Betty Forest retired as the founding Director of the Nursing Program at Quinsigamond Community College in Worcester, Massachusetts in 1990. In 1965, when associate degree nursing education was growing tremendously across the United States, Dr. Forest founded the program with just 35 students. Today it admits two classes a year, has a long waiting list for admissions, and a national reputation for excellence.

Dr. Forest became a nursing educator by chance. After ten years as a practicing nurse at Columbia Presbyterian Hospital in New York City, she discovered that she enjoyed teaching student nurses. At the encouragement of her supervisors, and the continued mentoring of Mildred Montag, whom Dr. Forest had known in her Adelphi days, she pursued her master’s degree at Teachers College, Columbia University.

After receiving her master’s degree, Dr. Forest taught in the Associate Degree Nursing Program at Queens College for four years. She also went on to earn her doctorate in nursing education from Teachers College.

Before founding the nursing program at Quinsigamond, Dr. Forest was an avid traveler, and for 10 years she would work as a ship nurse on cruise ships. She sailed to South America, the United Kingdom, and throughout the Mediterranean on cruise lines like United States Lines, Moore-McCormack Lines, and American Export Lines. Dr. Forest remembers in vivid detail assisting in emergency surgery for a crew member with a ruptured peptic ulcer while out at sea.

When and why did you first want to become a nurse?

Dr. Betty Forest '47 as a student I first saw Adelphi from my parent’s car window when I was six. I knew then that I would go to school there. When I graduated from Hunter College High School at age 16, I knew I wanted to be a nurse, but my parents really encouraged me to pursue a college degree (at the time nurses didn’t need one). I came to Adelphi’s four-year nursing degree program after one year at Hunter College. I needed to find a way to pay for Adelphi, so I applied for and received a cadet nursing scholarship.

Do you have favorite memories of your time at Adelphi and your residencies?

When I came to Adelphi in 1943, they still had not broken ground for construction on the residence halls for women, and I lived in a fencing room in Woodruff Hall for almost the entire academic year. When the time came to move, we carried drawers filled with our clothes across campus. I also remember feeling the excitement in the air in 1944, as we prepared for a visit from first lady Eleanor Roosevelt. I also sang in the Adelphi Chorus, and recall a joint Christmas Concert with the Cadets of the Kings Point M.M. Academy.

I began my student rotations at Queens General Hospital. Each school had its own uniform; we were known as “the buttercups” because of our yellow dresses and white aprons. After that I spent rotations in the tuberculosis sanitarium in Farmingdale, the Central Islip State Hospital for psychiatric nursing, and a nursery school in Harlem.

What are some of the changes you have seen in nursing through the years?

There have been so many. When I first started we were told never to ask any questions; now, students are told to do just that. I think we have learned so much about medicines and treatments, but we have lost so much in terms of what we do for the patient. It has become big business – money driven. Nurses used to be able to spot changes in a patient easily because they spent so much time with them, but these days nursing is technology driven and we have lost so much time with the patients. We need to get back to the “care” in nursing care.

What advice would you give to today’s nursing students?

Enjoy the collegiate experience. Study, learn, and also, have fun. Nursing is a broad field; every year brings new careers you can choose from. A great future lies ahead.