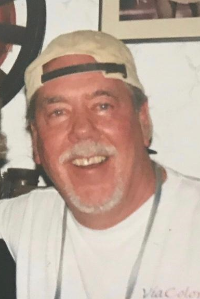 Ronald G. Adams, 82, of Mystic died Saturday, Aug. 3, 2019, at Lawrence and Memorial Hospital. He is survived by his beloved wife of nearly 60 years, Maureen A. (O’Brien) Adams.
He and his wife, Maureen, came to Mystic because of the Mystic Oral School where his daughter, Kerrie, was a student. He became PTO President of the Oral School and was very involved in deaf education and studies.
Ron was a natural born salesman and entrepreneur. Starting at the age of 12, Ron sold flower seeds door to door, to his Bronx building neighbors. Fortunately, over the years he perfected his salesmanship skills, selling everything from cutlery, kitchen cabinets, swimming pools and saunas. He owned “Sports Souvenirs” in Olde Mistick Village and “The Adams House” Bed & Breakfast on Cow Hill Rd. His greatest entrepreneurial endeavor was creating a hat business, “Adams Headwear.” These hats are still being sold and worn throughout the world.
Ron was a member of the Mystic Knights of Columbus, the Mystic Lions Club, the Westerly Yacht Club, The Stonington Yacht Club and Ram Island Yacht Club. He enjoyed winters with his family skiing in Vermont and summers boating in Mystic.
In addition to his wife, Ron is survived by his four children, Colleen Mary Goujjane, Kevin Gerard Adams of Westerly, Kerrie Beth Adams of Mystic, and Christopher Michael Adams of New York; as well as ten grandchildren and many beloved nieces and nephews. He is also survived by his two brothers, Howard and Randolph Adams.
Besides his parents, he is predeceased by his daughter, Mary Elizabeth Adams.
A Memorial Service will be held at 5 p.m. Monday, Aug. 5, at the Dinoto Funeral Home, 17 Pearl Street, Historic downtown Mystic.
To share a message of condolence or remembrance with his family, please click the link below.