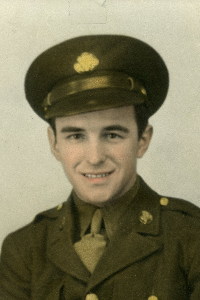 
Manchester– Roger J. Garon, 97, died July 29, 2019 at Hillsborough County Nursing Home following a brief illness.
He was born in Manchester on May 12, 1922 the son of Napoleon and Exilia (Talbot) Garon.
Roger was employed by International Shoe Company on Queen City Ave. for 3 1/2 years. While employed there he operated machinery used for buffing heels and soles on newly manufactured shoes.
Roger then enlisted in the U. S. Army. He served for 21 months in the Continental United States as a shoe repairman. He was assigned to a Quartermaster company at Geiger Field in Spokane, WA. He worked in the shop utilized for the Army Air Force, where he applied new soles and heels and performed necessary finishing work. Roger also worked overseas for one year as a Demolition Specialist in the Asiatic Pacific Theatre of Operations where he set explosive charges in coves to destroy enemy personnel and equipment. He also assisted in road construction work by blasting rocks and obstacles. Upon returning from the military he owned and operated Garon Shoe Repair. Roger enjoyed his yearly summer vacations at Hampton Beach during the last week of August through Labor Day, which was spent with family and friends. He was very devoted to his family and friends– always willing to help others in need. He also enjoyed fishing, bowling, golfing, French music, playing cards, reading Time, U.S. News, and National Geographic magazines, and watching Red sox and Patriot games with his son in law.
Roger met his true love, Violette Bourque and they were married in St. George Church on May 29, 1948. She passed away on September 8, 2015.
Family members include one daughter, Theresa Brodeur and her husband, Armand, one sister in law, Lucille Bourque and several cousins. He was predeceased by two sisters, Germaine Garon and Yvonne Lacroix. The family would like to thank the Hillsborough County Nursing Home A-1 and C3 Units wholeheartedly for the care, love and support they gave to Roger. Also to Home, Health & Hospice for the moral support that was given to Roger’s family was greatly appreciated.
A mass of Christian burial will take place on Thursday, August 8, 2019 at 10 am in St. Peter Church in Auburn. A committal service with military honors will follow in NH Veterans Cemetery in Boscawen.
In lieu of flowers, it is requested that memorial donations in Roger’s name be made to the charity of one’s choice.
J.N. Boufford & Sons Funeral Home is in charge of arrangements.
For more information and online guest book please visit www.bouffordfuneralhome.com.