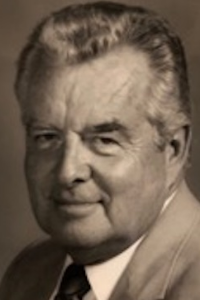 Harold C. “Hal” Allen 09/24/31 – 07/30/19
Hal passed away at the age of 87 in his home in Thousand Oaks on Tuesday evening surrounded by his family. He was born at St. Francis Hospital in Santa Barbara to Harry P. Allen and Garnette “Peggy” Allen on September 24, 1931.
Hal was raised in Santa Barbara and graduated from Santa Barbara High School in 1949. He then joined the Air Force and became a crew member in the Strategic Air Command in a B36 reconnaissance bomber from 1950 to 1954 achieving the rank of Seargent. While stationed in Spokane Washington Hal met his future wife Beatrice Leier and they were married in Santa Barbara in 1955.
After his service in the military Hal attended UC Santa Barbara earning his degree in Political Science in 1958. Hal joined General Telephone in 1959 and held many positions, he retired in 1994 as Director of Government Affairs. He received many recognitions and awards throughout his career. Hal was very involved in the community, belonging to the Rotary Club, American Legion and the Telephone Pioneers Group. Hal loved his family, Golf, Poker, crossword puzzles and baseball, especially the LA Angels. Hal is survived by his wife Bea of 64 years, his four sons, Craig Allen of Santa Barbara, Bryan Allen and his wife Alisa of Calabasas, Jeff Allen of Thousand Oaks and David Allen and his wife Jackie of Thousand Oaks. He is also survived by his brother Harry Allen of St. Paul Minnesota, four grandchildren, Jennifer Light and her husband Phil of Thousand Oaks, Justin Allen and his wife Samantha of Camarillo, Sarah Allen of San Diego and Julia Allen currently at NAU, one step grandson, Collin Morales and family, and two great grandchildren, Westyn Light and Magnolia Allen. His death was preceded by his father, Harry P. Allen and his mother, Garnette Allen.
In lieu of flowers please make a donation to Hospice Foundation of America or the Parkinson’s Foundation.
Family and friends are invited to a Graveside Service at 11:00am on Thursday, October 17, 2019 in the Santa Barbara Cemetery, 901 Channel Drive, Santa Barbara.
Arrangements are under the direction of the JOSEPH P. REARDON FUNERAL HOME & CREMATION SERVICE, Ventura.