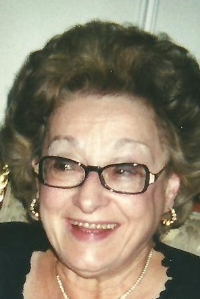 Anastasia L. (Spelios) Andreson, 85, of Worcester, fell asleep with the Lord on Sunday, July 28th after a long illness. She is survived by her husband of 63 years, Nicholas E. Andreson; her two daughters, Heather and her husband, Michael Renzoni of Holden and Priscilla and her husband, Ronald Tedesco of Mission Viejo, CA; three grandchildren, Nicholas Renzoni, and Nicholas and Christiana Tedesco.

She was born in Springfield, the daughter of Dr. Louis and Viola (Coulopoulos) Spelios; and was a graduate of Classical High School in Springfield and Smith College in Northampton earning a Bachelor of Arts Degree in 1956. While at Smith, she played on the softball team and began dating the love of her life, Nicholas. They married in September of 1956 and moved to Worcester, where she and her husband owned the famed Colonial Bowling Center for over 59 years. She was responsible for the design and iconic décor of the bowling center which remains intact today. Mrs. Andreson was an active member of the Worcester Smith Club, having served as its President three times and chaired Smith's Capital Fund Campaign, raising over a million dollars for her Alma Mater. She attended many reunions at Smith and remained close with fellow alumnae.

An ardent lover of haute cuisine and an incredible chef and baker, Mrs. Andreson penned a manuscript about the history of tea and cooking with tea. She was a former member of the Food and Wine Society with her husband, attending gastronomical events hosted by famed chef and fellow alumna, Julia Child. She was a gifted artist and oil painted as a hobby. Mrs. Andreson was a member of St. Spyridon Greek Orthodox Cathedral. She will be remembered as an incredible wife, mother and grandmother, bringing boundless love and happiness to her family; as well as for her sharp mind and irrepressible sense of humor which made her so engaging to those she met.

Her funeral is Friday, August 2nd at 11:00 a.m. in St. Spyridon Greek Orthodox Cathedral, 102 Russell Street. Burial will follow in Hope Cemetery. A visitation will be held from 10:00 until the time of the service at the Cathedral. In lieu of flowers. please make memorial contribution's to St. Spyridon Greek Orthodox Cathedral. O'CONNOR BROTHERS FUNERAL HOME is assisting the family with arrangements.